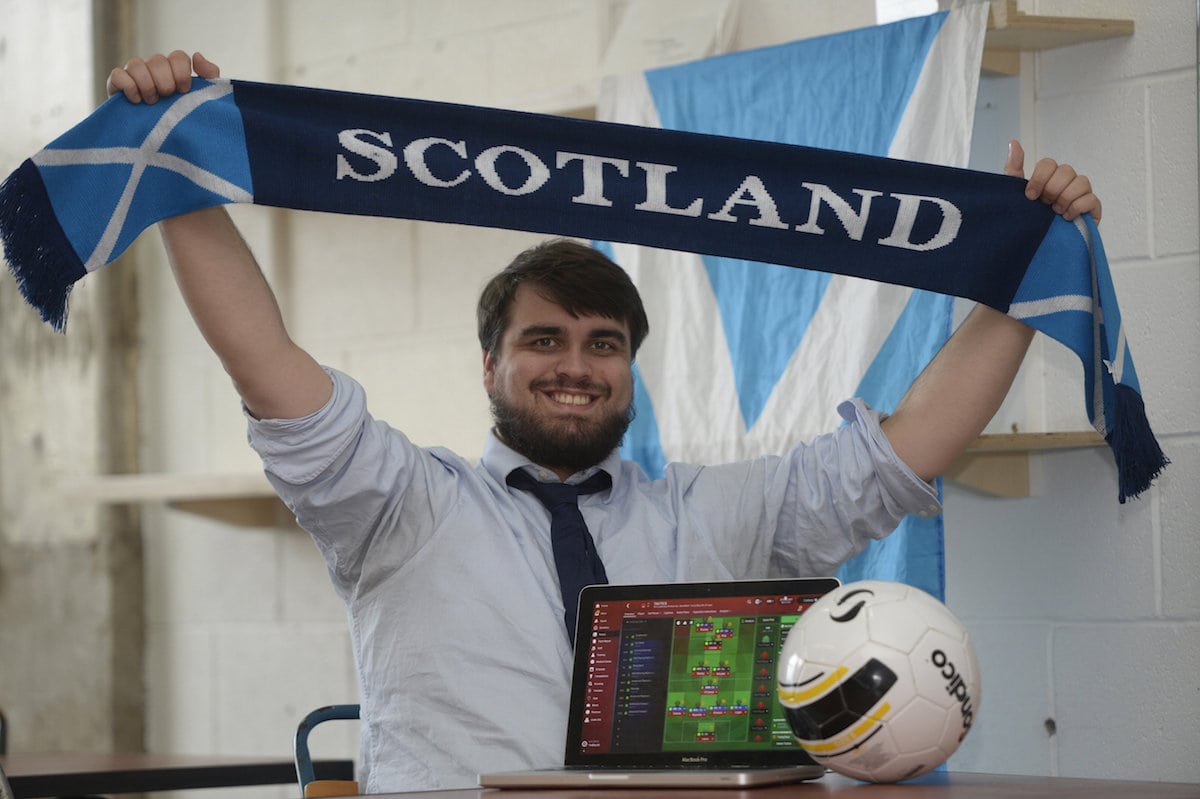 The SFA have appointed a new manager who will take Scotland to an international tournament — of the computer game Football Manager.

Findlay Mair, 25, claims he will be the first manager to represent the Scotland men’s team at an international tournament since 1998.

He will pit his gaming skills against participants from 15 other European countries at the management simulation competition this weekend.

Findlay scored the top job as part of an online competition ran by the SFA and will jet down to London where he hopes to lead his country to international glory.

The football fan and writer from Aberdeen will be given an in-game budget of £500million as part of the fantasy draft tournament.

And if successful, he could be crowned The Official Football Manager 2018 Copa Manageria champion.

With his tongue firmly in his cheek, Findlay said that he is taking it a game at a time.

He said: “The SFA asked on their Facebook page if anyone fancied being the next Scotland manager and I thought ‘why not?’ so I put my name forward.

“It’s an honour to represent my country. I hope I don’t let anyone down.

“This will make me the first manager to represent my country at an international tournament since 1998.

“I can’t give away my tactics so close to the game but I can assure everyone that I am not going to get carried away. We will take it one game at a time.”

In order to qualify for the position, keen gamer Findlay had to post his best Scottish Football Manager story to the SFA Facebook page.

The writer boasted of his success while playing the game at home where he led Aberdeen to domestic and European glory and won the World Cup with Scotland.

He was then chosen at random earlier this month.

The tournament will be played out at the game developer Sports Interactive’s offices in London this weekend.

Each participant will create a squad of 20 players, using the Football Manager 2018 ‘Fantasy Draft’ system.

The makers of the game have paid for his hotel and travel to the UK Capital and given him a free copy of this year’s edition of the game.

Findlay added: “I’ve been playing every version of the game since I was a kid but never thought I’d get a free trip out of it.

“The SFA were asking for stories of our greatest achievements in any version of the game and I told them all about what I’d done with Aberdeen and, of course, Scotland.

“Despite everything I’ve won on the game including the Champions League and the World Cup I still think the most unrealistic part was that Aberdeen managed to get a stadium built — which they named after me.

“I played the last game for so long that my in-game self ended up having a son come out of the Aberdeen academy but he’s, unfortunately, not very good.”