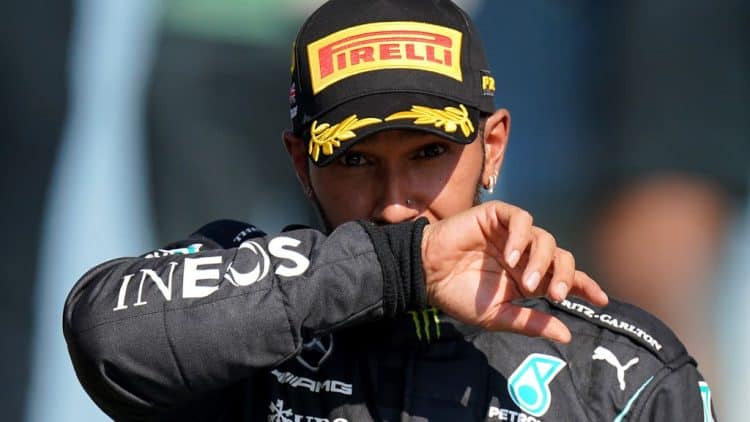 Mercedes, Formula One and its governing body the FIA have issued a joint statement condemning the online racist abuse aimed at Lewis Hamilton.

Hamilton, 36, was targeted following his crash with rival Max Verstappen on the opening lap of Sunday’s British Grand Prix.

The seven-time world champion delivered a superb comeback drive to record his eighth win on home soil, while Verstappen was taken to hospital following the 190mph shunt which registered at 51G.

“No place in our sport”

Red Bull said he was released from hospital at 10pm on Sunday night “without major injuries”.

The statement read: “During, and after, yesterday’s British Grand Prix, Lewis Hamilton was subjected to multiple instances of racist abuse on social media following an in-race collision.

“Formula One, The FIA and Mercedes-AMG Petronas F1 Team condemn this behaviour in the strongest possible terms.

“These people have no place in our sport and we urge that those responsible should be held accountable for their actions.

“Formula One, the FIA, the drivers and the teams are working to build a more diverse and inclusive sport, and such unacceptable instances of online abuse must be highlighted and eliminated.”

Speaking on BBC Radio 4’s Today programme, Mercedes team principal Toto Wolff said: “We have seen it in the football at the European Championship and the abuse is absolutely not acceptable, and it is the same yesterday.

“I still question whether some just don’t get it. This is not acceptable and we will react to it.”

Hamilton was handed a 10-second penalty for the accident with Verstappen after the stewards adjudged him to be “predominantly at fault”.

The abuse came from a number of countries and started during Sunday’s race in response to posts from both F1 and Mercedes’ social media platforms.

It is understood that F1 is compiling a dossier of the offensive posts and will raise them directly with the platforms and call on them to take stringent action.

“While we may be fierce rivals on-track, we are all united against racism,” the Milton Keynes team said.

“We condemn racist abuse of any kind towards our teams, our competitors and our fans.

“As a team we are disgusted and saddened to witness the racist abuse Lewis endured yesterday on social media after the collision with Max.

“There is never any excuse for it. There is certainly no place for it in our sport and those responsible should be held accountable.”

He wrote: “The racial abuse on social media towards our players after yesterday’s game is unacceptable. This sort of ignorance has to be stopped.