Boris Johnson and Rishi Sunak, the chancellor, are among the hundreds of thousands of people currently self-isolating. 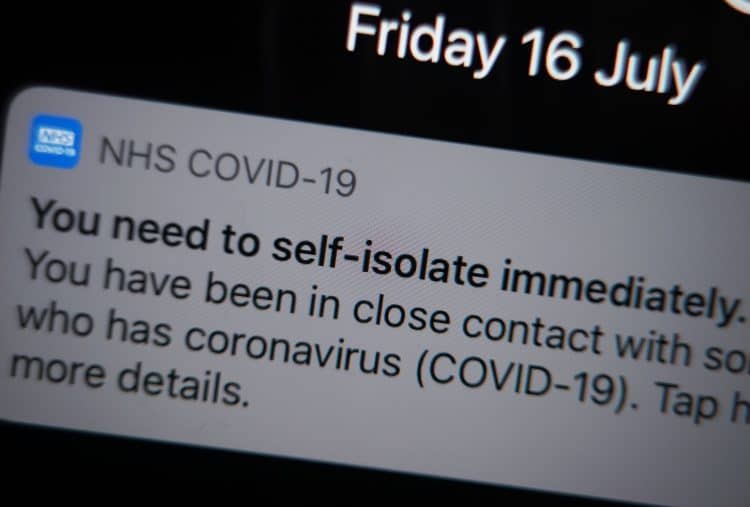 The NHS Covid-19 app will not have its sensitivity tweaked, Downing Street said – despite industries warning of staff shortages as England lifts almost all coronavirus restrictions.

Boris Johnson and Rishi Sunak, the chancellor, are among the hundreds of thousands of people currently self-isolating due to being alerted by NHS Test and Trace that they have come into close contact with a positive case.

Hospitality, leisure, food production and retail sectors have complained of having to close premises or cut opening hours because of the number of people being told to stay home for ten days after being in contact with a person who has tested positive.

But the government said it does not plan to reduce the sensitivity of the app to avoid people being “pinged”.

The prime minister’s official spokesman, asked whether the app is working as expected, meaning it does not need tweaking, told reporters: “That’s correct.”

Speaking before a Downing Street briefing, Business Secretary Kwasi Kwarteng said the number of workers being “pinged” by the NHS app is the “single biggest issue” being raised with him by company bosses.

He told LBC he accepts it is a “difficult situation” but said “there isn’t any movement on it”, and it will still be 16 August before there is a wider relaxation for those who have been had both doses of a Covid-19 vaccine.

Nick Mackenzie, chief executive of hospitality chain Greene King, told BBC Radio 4’s Today programme that 33 of his pubs were shut last week due to workforce shortages, leading him to call for a test and release scheme for those testing negative.

PureGym boss Humphrey Cobbold told the programme that the country has become the “United Pingdom”, with one in four of his staff notified to quarantine.

Johnson’s spokesman said the government will “constantly review” issues around critical workers and key infrastructure, after an exemption for frontline NHS and social care workers who are double vaccinated and test negative for the virus was brought in this week.

The prime minister will lead a virtual press conference on Monday afternoon from his official country residence, Chequers, to mark the lifting of restrictions in England, a decision that has come under fierce criticism from political leaders.

The decision to take the final step of the road map out of lockdown means face masks are no longer mandatory in shops and on public transport, limits on gatherings have gone, and the work-from-home guidance has ended.

Nightclubs, theatres and restaurants can fully reopen, while pubs are no longer restricted to table service only.

Professor Andrew Hayward, a member of the Scientific Advisory Group for Emergencies (Sage), stressed that if the public do not take a cautious approach to their rediscovered freedoms, the country could “move into the mid and high tens of thousands of deaths” in what he called the “biggest wave of Covid infection that we have ever seen”.

The UK government has again called for caution after people queued to return to nightclubs in the early hours of Monday.

The prime minister’s spokesman said: “We continue to urge nightclubs to use the Covid pass to enable them to check whether people have been double jabbed or have had a recent negative tests – I think that’s in their interests and the interests of those attending.”

The possibility of making the use of Covid passes compulsory would be considered “if necessary”, he added.

Related: Masks off? Not for the overwhelming majority of Brits