The gesture prompted predictable calls to "keep politics out of sport" from some corners. 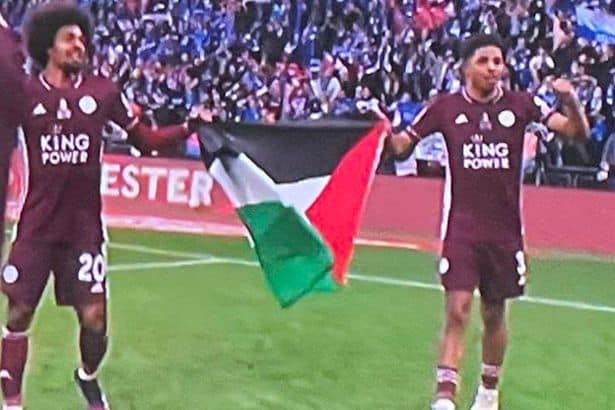 Leicester City players Hamza Choudhury and Wesley Fofana held a Palestinian flag aloft in a show of solidarity while celebrating their 1-0 FA Cup final triumph over Chelsea on Saturday.

Amid wild celebrations after the final whistle, Choudhury and Fofana clasped the flag as they took a lap of honour in front of fans – with Choudhury draping it around his shoulders as he went to collect his winner’s medal.

The pair’s gesture of solidarity was met with a predictable backlash in some corners, with Nick Timothy – Theresa May’s former adviser – tweeting that football had “got itself into a mess” and claiming it was “time to go back to the old-fashioned rule of keeping politics out of the game”.

Football has got itself into such a mess. Time to go back to the old-fashioned rule of keeping politics out of the game. pic.twitter.com/mVo2Gd8NuW

But Husam Zomlot, the head of the Palestinian Mission to the UK, wrote an open letter to Fofana and Choudhury to express his thanks for the gesture.

He wrote: “Allow me, on behalf of the Palestinian government and people, to extend our profoundest gratitude that, in your moment of FA Cup triumph, [Fofana and Choudhury] used the historic occasion to show solidarity with the plight of the Palestinian people.

“Carrying the Palestinian flag on the stage of one of football’s most august cup competitions is a show of support that is reverberating all over Palestine. For a people beleaguered, occupied and under intense bombardment for daring to stand up for their rights, your gesture could not be more timely and appreciated.”

Israeli air strikes in the heart of Gaza City have flattened three buildings and killed at least 26 people, making it the deadliest single attack since heavy fighting broke out between Israel and the territory’s militant Hamas rulers nearly a week ago.

The Gaza health ministry said 10 women and eight children were among those killed in Sunday’s attack, with another 50 people injured.

Rescuers raced to pull survivors and bodies from the rubble following the assault.

Earlier, Israel said it had bombed the home of Gaza’s top Hamas leader in a separate strike. It was the third such air attack targeting the homes of Hamas leaders in the last two days.

Israel appears to have stepped up its air strikes in recent days to inflict as much damage as possible on Hamas, as efforts to broker a ceasefire accelerate with the arrival of a US diplomat in the region and talks at the UN Security Council.