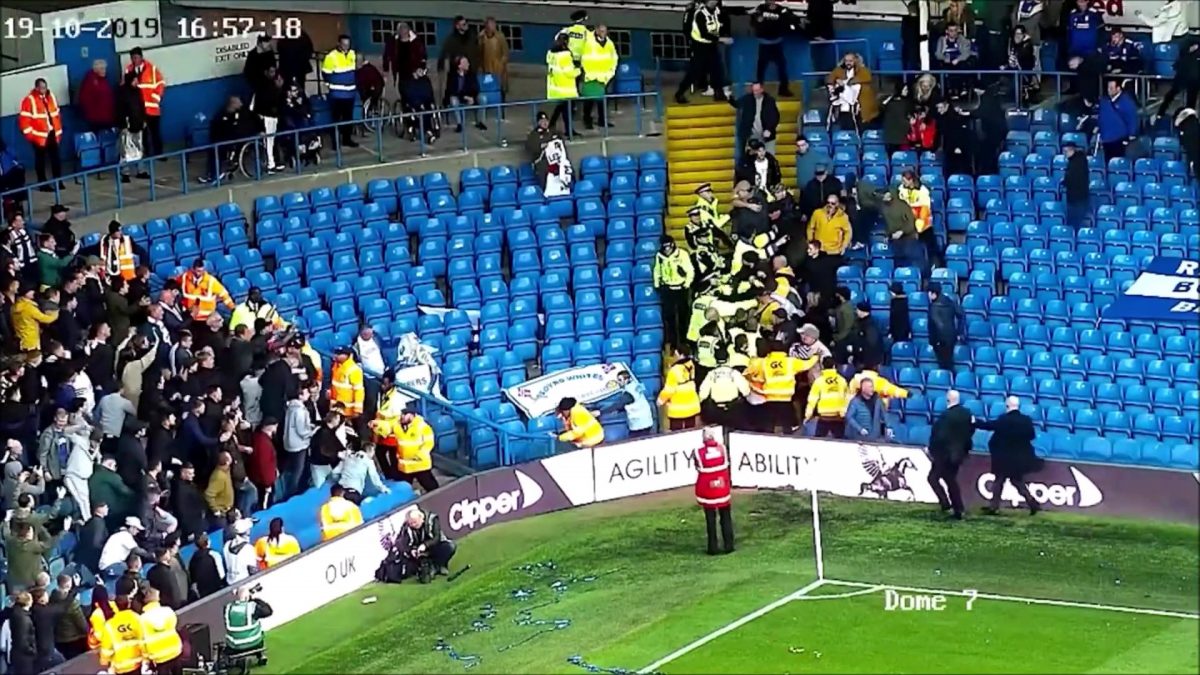 As Leeds United make their long awaited return to the top flight with a well battled game against Liverpool, fans of the club and Birmingham City have been banned and jailed for lengthy spells.

The violence harked back to the troubling days of the 70s and 80s with fights breaking out inside and outside of the ground.

Rival football thugs who clashed in the “worst violence seen in a decade” have been jailed and banned from matches for more than 100 years.

Leeds United and Birmingham City fans clashed inside and outside Elland Road last year in scenes that were “like a war zone” according to horrified witnesses.

Shocking CCTV footage shows mobs of supporters battling in the stands at the end of the club’s Championship clash on October 19.

Brawling then spilled into the street outside the ground for around 45 minutes before police were finally able to disperse the crowds.

Bottles and cones were thrown at mounted officers and cops on foot trying to quell the violence. Ten people were arrested on the day.

Leeds Crown Court heard how around 30 away fans tried to stop one yob from being arrested by punching, kicking and spitting at stewards and police officers.

“Although only a relative minority of supporters of both sides were involved in these incidents, their behaviour had a significant impact on ground staff and police officers as well as other fans and families attending the game.”

It led to 29 people, mostly Birmingham fans, being charged with violent disorder.

Of those, 23 entered guilty pleas at hearings at Leeds Crown Court in July.

A total of 19 defendants received prison sentences totalling 17 years, with six of those being suspended sentences.

Two youths received youth rehabilitation orders and one other defendant was given a community order.

All were given football banning orders ranging from four to three years to a total of 109 years.

DS Khan added: “Genuine fans, regardless of team loyalties, had no hesitation in condemning what took place, and the support of the public played a huge part in the success of our appeals.

“We worked closely with our colleagues at West Midlands Police to arrest the majority of the suspects in a series of dawn raids.

“The prison sentences and lengthy banning orders they have now received should send a very clear message to those who think they can involve themselves in similar disorder in and around football games without having to face the consequences.

“Behaviour such as theirs is completely unacceptable and has absolutely no place in football where people should be able to support their teams positively in a safe and trouble-free environment.

“What also really stands out is that the vast majority of those involved have little or no previous involvement in football hooliganism yet have rightly received significant punishments from the courts that demonstrate how these offences simply will not be tolerated.”

Five other men have pleaded not guilty and are due for trials in December, May and April.

Another man is due to make his initial appearance at Leeds Magistrates Court next month having been charged later.

A further defendant is due to be sentenced on September 28.

Marcelo Bielsa took full responsibility for Leeds’ poor display after they crashed out of the Carabao Cup to Hull 9-8 on penalties.

Hull forward Mallik Wilks’ deflected shot early in the first half appeared to have sunk his former club, but Ezgjan Alioski made it 1-1 deep in stoppage time by slamming home an equaliser Bielsa’s side did not deserve.

Leeds midfielder Jamie Shackleton’s penalty was kept out with the score at 8-8 and Hull defender Alfie Jones then converted to send Hull into the third round.