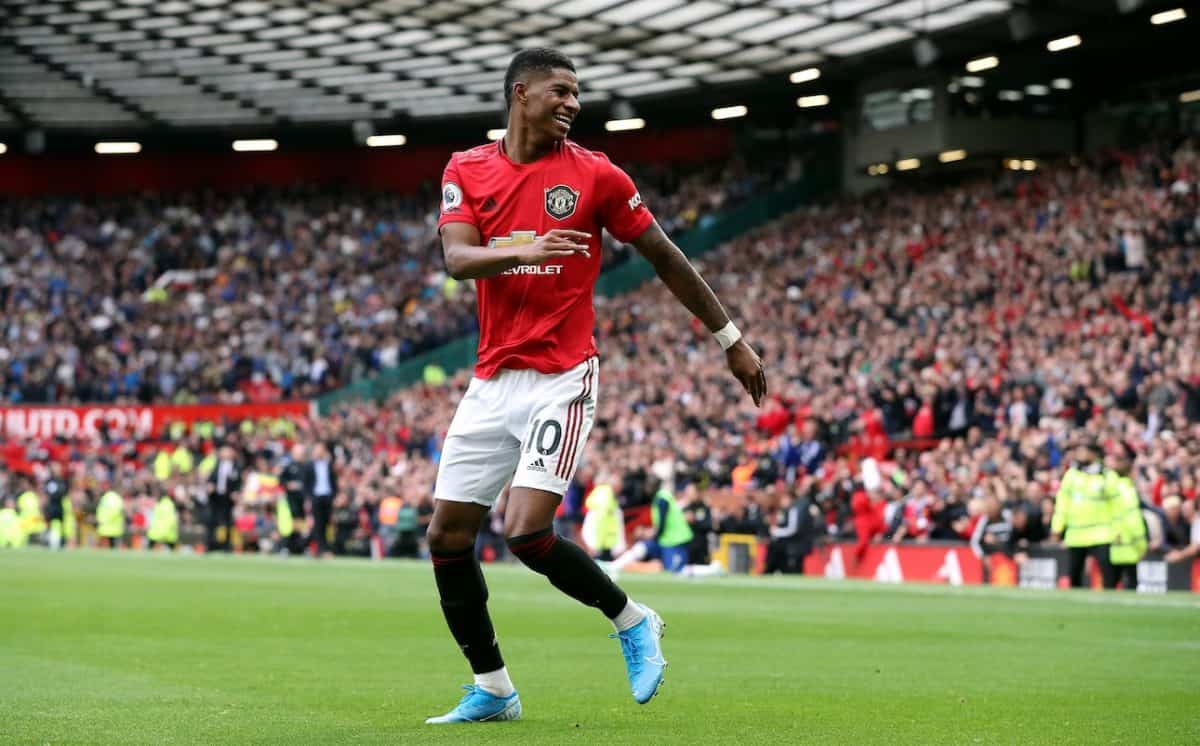 Anthony Martial and Daniel James were also on target at Old Trafford.

The Premier League kept the most eagerly anticipated of the opening weekend to last as Ole Gunnar Solskjaer started the Reds’ latest transitional season against a side buoyed by the appointment of a club great.

Lampard’s side were on top for large patches but ended up being blown away at Old Trafford, where Rashford’s double complemented goals from Anthony Martial and debutant Daniel James as United’s curtain-raiser ended in a dream 4-0 victory.

Solskjaer will be first to admit the display was far from perfect, but this win was just the tonic after a summer of discontent.

Chelsea had started the brighter on Sunday and Tammy Abraham and Emerson Palmieri efforts off the woodwork bookended an entertaining opening period in which Rashford’s spot-kick was the difference.

Lampard’s new-look side continued to show promise as the second half got under way, only for United to show a ruthless edge sorely lacking in recent seasons.

Harry Maguire, this week made the most expensive defender in history, won the ball, starting a move that ended with Martial celebrating the return of his number nine jersey by turning in an Andreas Pereira cross.

Chelsea were punch-drunk and Paul Pogba put a summer of speculation behind him by superbly putting in Rashford to fire home.

New boy James came off the bench to score a deflected effort in front of the Stretford End following more fine work by Pogba and, if that was not enough, United kept a clean sheet.

Solskjaer named the youngest starting line-up seen in the Premier League this weekend, while Chelsea’s side also had an accent on youth as Mason Mount and Abraham started.

The decision to select the latter looked bold given Olivier Giroud was on the bench, yet four minutes in the academy graduate turned smartly and unleashed a fierce shot that smacked the far post.

Pedro struck wide and Cesar Azpilicueta sent over a threatening cross during a fine Chelsea start, with Mount trying his luck from distance as the away fans chanted, ‘Just like London, your city is blue’.

Lampard’s side were showing potential but United’s attacking options were unsettling. A high press forced Kurt Zouma into an early mistake that Martial should have done better with and things soon got worse for the Chelsea man.

Referee Anthony Taylor allowed play to continue after a tactical foul during a United break, which ended with Rashford being fouled by the Frenchman in the box.

The decision was rubber-stamped by a VAR check and Rashford followed a stuttered run-up with an unerring finish.

United looked to kick on after the opener but Martial’s radar, as was some of his decision-making – something that allowed Ross Barkley, who earlier went close, to test captain David De Gea.

Aaron Wan-Bissaka was impressing but he was involved in the defensive confusion that led to Emerson striking the bar late in the first half.

Chelsea continued in the ascendancy after the break, with Pedro seeing an effort deflect over and Emerson stinging the palms.

An overzealous Abraham challenge on Scott McTominay remained a yellow card after a VAR review against a rattled United side, who were creating precious little.

However, a tackle by Maguire on the edge of his own box started a move that would bring about a 65th-minute goal.

Solskjaer’s side continued to push after the initial break fizzled out, with Pereira making space for himself and sending in a cross that Martial was able to bundle home.

Old Trafford erupted, just as it would again two minutes later. Pogba may have been in his own half but he spotted Rashford’s run, with the forward keeping his cool after being picked out to slot home.

Pogba burst forwards with pace and power before feeding the ball to James, whose effort clipped Emerson and beat Kepa Arrizabalaga to seal a 4-0 triumph.