Family members were told to say their final goodbyes after Jeremy also caught pneumonia and was given "zero chance of survival". 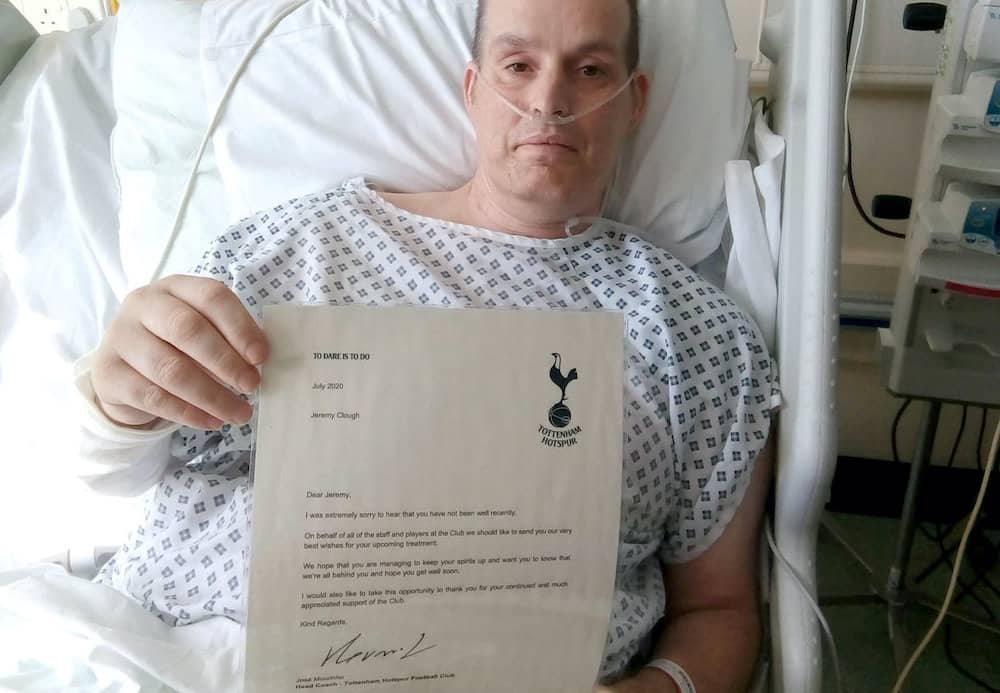 A football fan who spent a staggering 110 DAYS in hospital battling coronavirus has made a miracle recovery – thanks to support from his beloved Tottenham Hotspur.

Spurs-mad Jeremy Clough, 47, is one of the UK’s longest-suffering Covid patients following a 16 week stint in hospital fighting the killer bug.

He was placed in an induced coma and at one point was given just 48 hours to live after being admitted to Northampton General Hospital on March 26 with sepsis.

Family members were told to say their final goodbyes after Jeremy also caught pneumonia and was given “zero chance of survival”.

But against all the odds, the security guard managed to pull through – thanks to the efforts of dedicated medics and the support he received from his heroes at Tottenham.

Jeremy received a ‘get well soon’ card from manager Jose Mourinho and a signed shirt from striker Harry Kane during his hospital stay.

Head coach Jose thanked Jeremy for his support and wrote: “We hope that you will be managing to keep your spirits up…we’re all behind you and hope you get well soon.”

And Jeremy donned his favourite Spurs scarf as he was given a guard of honour by nurses who clapped as he left the high dependency ward last Monday (13/7).

Sister Nicola Clough, 44, believes the gestures from the London club is what helped footy-mad Jeremy though his recovery.

She said: “He is a massive Tottenham Hotspur fan and I think the support he received from the club definitely helped him to battle on.

“He’d been so frustrated he hadn’t been able to watch them play and he couldn’t wait to get out of hospital to see his beloved team again.

“One of the nurses contacted Jose Mourinho and said a patient of his was ill with coronavirus and is a massive Spurs fan.

“Jose sent him a signed get well soon card and he got a signed shirt from Harry Kane as well.

“He absolutely loved it. Once he got the letter he didn’t stop smiling. It was the first time we’d seen him smile in hospital.

“He was showing the card to all the hospital staff for days. We can’t thank the club enough for their support.

“It definitely helped him because in the early days he was given virtually nil chance of surviving. He spent three weeks in a coma.

“We were told he wouldn’t pull through – he had zero chance.

“The doctors told us to prepare for the worst and that he wouldn’t pull through because he was very ill after catching pneumonia from the virus.

“When he did pull through a doctor simply said he didn’t know how Jeremy had done it because his chances were so slim.

“I think he just wanted to be able to watch the football again before the season ended.”

Jeremy, who has muscular dystrophy, is now learning how to walk and talk again and is scheduled to have rehabilitation sessions once he’s made a full recovery.

Nicola, who lives with Jeremy and parents Gilian, 73, and Robert, 74, in Earls Barton, Northants., added: “We still have a long way to go but he is on the right road.

“They are doing physio to build up his mouth and throat muscles and his speech is coming back.

“Somehow he pulled through. It was amazing.

“His case was one of the first in Northampton General Hospital and no one else has been there this length of time.

“The others have gone home. Jeremy really is one of the longest serving patients in the country.

“He is a total miracle. I don’t know what it is that had helped him pull through.

“He is very strong and must be one of the strongest chaps around. I am so proud of him.”

She added: “It was very difficult for us when he was so ill and we couldn’t see or talk to him.

“We felt so guilty we weren’t there to comfort him.

“The nurses were outstanding, absolutely amazing. They comforted him and had fun with him.”

Northampton General Hospital said they would not comment on individual cases.

I was extremely sorry to hear you have not been well recently.

On behalf of all the players at the club we would like to send you our very best wishes for your upcoming treatment.

We hope that you will be managing to keep your spirits up and want you to know that we’re all behind you and hope you get well soon.

I would also like to take this opportunity to thank you for your continued and much appreciated support of the club.

Son Heung-min is the latest person from the Tottenham camp to state their intention to win the Europa League next season if they get there.

Spurs took a huge step towards qualification for Europe’s second-tier event with a 3-0 win over Leicester on Sunday and they now look a good bet to finish the job with only one game left.

Boss Jose Mourinho has already been publicly vocal about wanting to have a crack at it next season and now Son has backed his manager up.

“It’s a long race. Europa League is longer than Champions League,” Son said. “If we play in it, of course we’ll try to win this tournament.

“But we can’t promise anything. We’ll do our best in every single game. We’ve got a chance, we’ll try to look forward and then we’ll see.

“We want to finish as strong as possible, we want to be in the Europa League. Now we’ve got one more game to go and it’s going to be really difficult again. We try to enjoy and fight for every game.”