The 1967 European Cup winner’s medal belonging to Celtic legend and match winner Stevie Chalmers will take centre stage at a unique sale of sporting medals and trophies in Glasgow on 13thMarch. 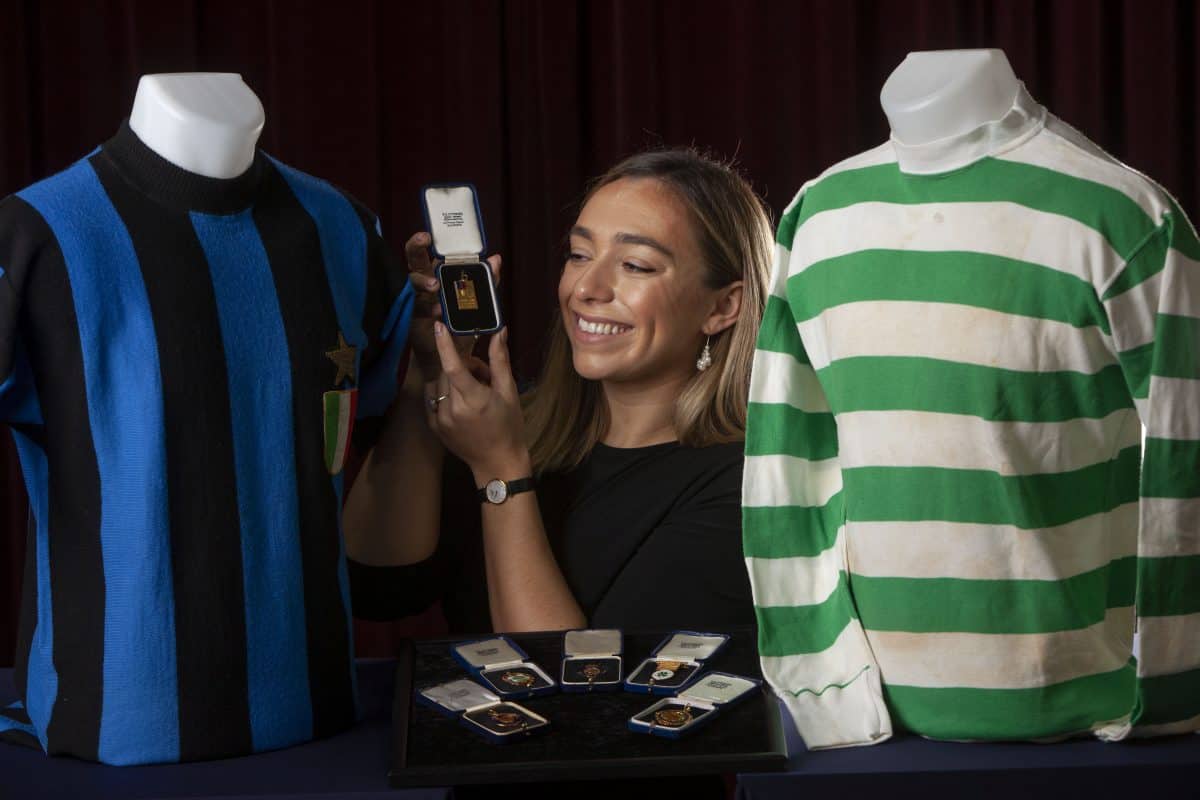 A medal belonging to Celtic legend Stevie Chalmers from the Lisbon Lions European Cup win in 1967 will be sold at auction along with other treasured belongings.

Celtic became the first British team to lift the trophy after Chalmers scored in the 85th minute, beating Inter Milan 2 -1.

But the Chalmers family are selling a collection of memorabilia owned by the footballer, who died last year aged 83 after battling with dementia.

His son, Paul, said a football jersey worn by Pele should have been given to another Hoops player after a match between Brazil and Scotland at Hampden in 1966 – but was given to Chalmers instead.

Among the possessions being sold by Chalmers’ six children, were five other winner’s medals from Celtic’s triumphant 1966/67 season, which will all be sold as one lot.

A jersey belonging to Inter Milan midfielder Gianfranco Bedin from the 1967 European Cup Final, which Stevie Chalmers swapped at the end of the match, will also be sold, along with a pair of football boots and match programmes.

They will be sold by McTears Auctioneers in Glasgow on March 13.

Paul Chalmers said: “I was too young to go to Lisbon but I remember the house being really crowded as we all gathered to watch the game.

“It was a tight match and when Dad scored the winner the house erupted.

“The team were all good friends and the Lions remained very close after they all retired.

“Bobby Lennox lived along the road in Saltcoats and for as long as Dad was able, he would stop by to take him to Celtic Park.

“He also visited Dad faithfully after he was diagnosed with dementia in 2013 and the two of them would talk about family and friends and share a few songs too.

“The Brazil game was a real highlight for my dad.

“He was surprised, but very proud, when Pele came over to swap jerseys at the end of the 1-1 draw at Hampden.

“Although he scored Scotland’s goal the jersey should have gone to Billy Bremner as he was nearest when the final whistle blew, but apparently Billy had been a bit rough with the tackling so Pele turned to Dad and gave it to him.

“My niece, Vicki, was Dad’s biggest fan and they spent a lot of time together in Troon.

“When she passed away in 2016 Dad was devastated and his condition started to deteriorate. From 2016 to his passing in 2019 was a very difficult time for the family and the experience put a lot of things into perspective.

“Dad’s medals and other memorabilia are with his six children and their families and with Mum’s blessing we all decided that the time was right to let another football fan become custodian of the archive.

“We will still have a million memories to share and that is what’s important.”

Managing director of McTear’s, Brian Clements, said: “This is an incredibly important archive that tells a fascinating story of one of Scotland’s most famous footballers.

“Stevie Chalmers was a huge figure in the game and gained immortality with Celtic fans when he scored the winning goal in the 1967 European Cup final.

“It is extremely rare to find anything associated with the 1967 final appear at auction, but to see the match winner’s medal is quite remarkable.

“This is one of, if not the, most important pieces of Celtic memorabilia ever to come to auction and we expect there will be considerable interest from football fans and sports historians across the globe.”

Neil Lennon claims Celtic are “a million miles” away from a ninth-successive Ladbrokes Premiership title despite a 3-1 win over Kilmarnock taking them 12 points clear of Rangers at the top.

Killie striker Eamonn Brophy scored in the seventh minute with a penalty he won when he was fouled by returning Hoops defender Jozo Simunovic.

Alex Dyer’s side ended the game with 10 men after midfielder Alan Power, already booked, was sent packing by referee Kevin Clancy for his challenge on right-back Jeremie Frimpong.

Rangers’ 2-2 draw against St Johnstone at McDiarmid Park saw them drop another two points – they have a game in hand – with Celtic carving up their 10th domestic win out of 10 fixtures in 2020, with 10 league games remaining.

“The performance and the reaction to going a goal down pleased me most,” said Lennon. “Though I felt the first goal shouldn’t have counted as Brophy was offside when he got the ball.

“The title is a million miles away as far as we are concerned, we just want to concentrate on our affairs.

“In the second half we were outstanding and I think some of our football was simply irresistible at times.”

Celtic will be looking to take care of business against Copenhagen in the return leg of their last 32 tie.

Neil Lennon’s men brought an away goal back with them from Denmark after a battling 1-1 draw at Parken Stadium.

When and where will the game take place?

The match is on Thursday, February 27 at Celtic Park, with kick-off at 8pm.

The game is live on BT Sport ESPN, with coverage beginning at 7.30pm.