Sir Jim Ratcliffe, a boyhood United fan who was in Camp Nou in 1999 is listed 27th on Rich List with a fortune of £6.075billion. 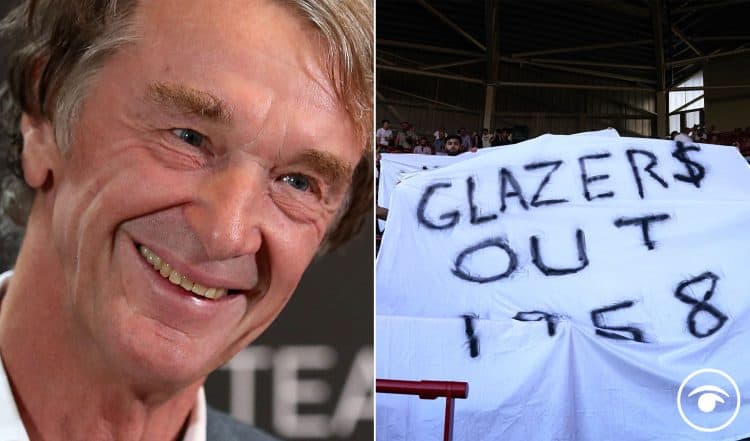 Tonight’s grudge match between Liverpool and Manchester United will be played out to a backdrop of protests as United supporters let their anger towards the despised owners be known.

Fans are at their wits’ end with the Glazer family and recently-formed supporters group The 1958 are leading their latest – and potentially loudest – protest against them before kick-off.

With this in mind #SirJimRatcliffeIn is trending on social media, with fans hoping he can take over the club, from the much hated Glazer family.

Ratcliffe has been a season ticket holder at Chelsea – despite being a Manchester United fan – and he has been named by Forbes as Britain’s richest man.

He has built up an estimated £20billion net worth through his chemicals company Ineos.

Ratcliffe explained to The Times in 2019, when asked about buying a Premier League club: “Even though clubs have those valuations today, nobody has ever paid those amounts of money. How much did Abramovich pay for Chelsea, £100 million? The Glazers, what £500 million?

“You can say it’s worth three, four billion but no one has ever paid those sums. Ineos has always tried to take a sensible approach. We don’t like squandering money or we wouldn’t be where we are today. It’s part of our DNA, trying to spend sensibly.”

‘Biggest team in the world’

Casemiro insists his move to Manchester United is not motivated by money and says he is determined to succeed at what he believes is “the biggest team in the world”.

The Brazilian, who has enjoyed a glittering career at Real Madrid, winning five Champions Leagues and three LaLiga titles after joining in 2013, is set to be unveiled as Manchester United’s fourth summer signing for a fee of £60million.

United, who have suffered chastening losses to Brighton and Brentford at the start of the new season, have struggled to compete for trophies in recent seasons leading many to suggest Casemiro’s move was driven by money.

“Those who think I’m leaving for money is because they don’t know me,” Casemiro said at the ceremony, as reported by Marca.

“I think there are a few (people) and they don’t know me. It’s not for money. They’re wrong. That’s not the case.

“At the end of the Champions League final (where Real Madrid beat Liverpool) I had the feeling that my cycle was over.

“I am honest. After the holidays, with a clear head, the feeling was the same. It wasn’t that fast. I already spoke with the club as soon as the Champions League finished.

“People don’t forget the club I’m going to, the biggest team in the world and that can compete with the greatness of Real Madrid, although now it doesn’t.”

Related: Watch: This is Manchester United! Gary Neville’s joke as they take on Liverpool