An entire set of Euro ’96 tickets – including to England vs Scotland when Gazza scored THAT sublime volley – have been found in an old suitcase and they’ve NEVER been used. The 31 ‘genuine’ tickets are in pristine condition, still fastened together – measuring 10ft in length – and cover every match in the […] 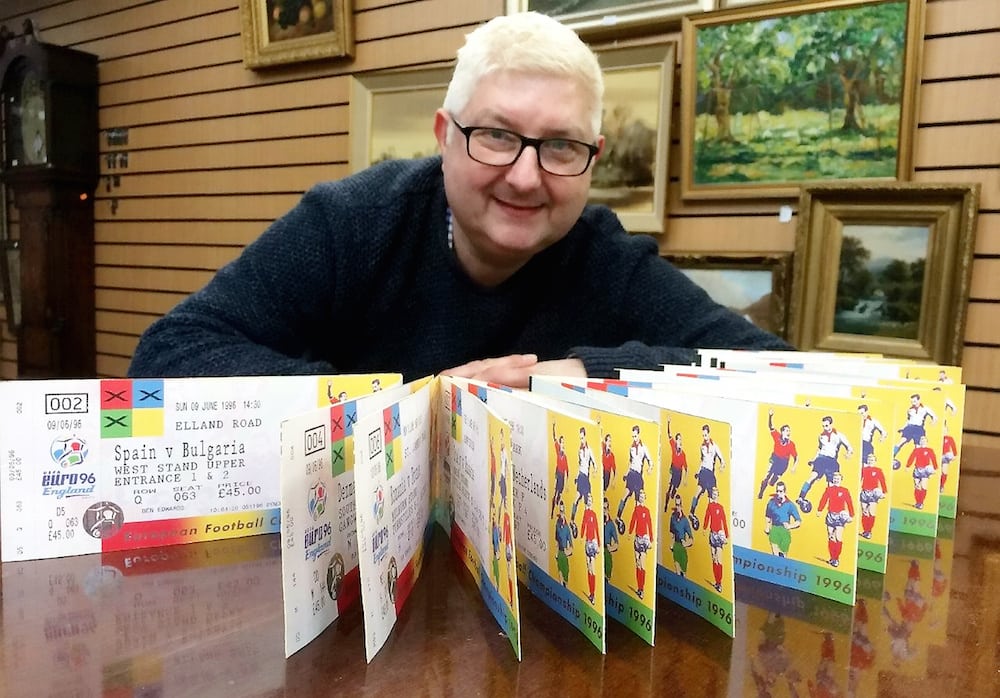 An entire set of Euro ’96 tickets – including to England vs Scotland when Gazza scored THAT sublime volley – have been found in an old suitcase and they’ve NEVER been used.

The 31 ‘genuine’ tickets are in pristine condition, still fastened together – measuring 10ft in length – and cover every match in the tournament which Germany won.

They range in price from £45 for the first group stage games to £130 for the final at Wembley and as a complete package would have cost £1,680.

But the tickets for the UEFA European Football Championship in 1996 hosted by England went unused, which for any die-hard football fan is a difficult thought to swallow.

It’s believed the tickets — printed with the name Ben Edwards – were a competition prize and have laid in the suitcase for 22 years.

The tickets were unearthed after the owner, who wishes to remain anonymous, came across a vintage suitcase given to them by their mum ten years ago.

Inside were cigarette cards belonging to the owner’s grandad and they decided to take them along for a free valuation at Hansons Auctioneers in Etwall, near Derby.

During the valuation, and while flicking through the cards, the valuer pulled out the stack of tickets.

The owner, from Stoke, Staffs., said: “They were in a case that housed my grandad’s old cigarette cards.

“My mum had the case for years and then gave it to me about ten years ago. It was actually the cigarette cards that I took along for valuation.

“We were just looking through the cards with the valuer when the tickets got in the way and he pulled them out.”

The tickets are believed to have been inadvertently picked up by the owner’s grandma at a car boot sale.

“I have no idea where the tickets have come from. It’s a complete mystery,” added the owner.

“I’m not interested in football and don’t support a team and nor is anyone in my family.

“My mum, who died last year at the age of 90, certainly wasn’t interested in football. I don’t think my mum was a ticket tout.

“The only thing I can think of is that she picked up the tickets by accident at a car boot sale, table top sale or spring fair as she used to be involved in things like that.

“Because she wasn’t interested in football, she probably thought they were worthless.”

Alistair Lofley, football valuer at Hansons Auctioneers, said: “All the tickets are printed with the name Ben Edwards. Perhaps they were a competition prize or given to a member of the FA.

“Some of the matches were played on the same day so it would have been logistically impossible to go to them all, unless they were bought to share with friends.

“For any diehard football fan, to think of these tickets going begging is hard to swallow – an entire tournament of matches in England that someone could have watched.

“We have been carrying out research on them and, at this stage, they appear genuine.

“Football ticket stubs from important games are collectors’ items and this set is sure to appeal. I have put an estimate of £100-£150 on them.”

Paul Gascoigne – topped with his bleached-blond hair – was in his pomp on that sunny Wembley afternoon at Euro ’96 when England beat Scotland 2-0.

His wonder strike is considered one of the most iconic goals in the game’s recent history.

The Euro ’96 tickets will be sold on May 23 at a Sporting Memorabilia Auction at Hansons Auctioneers, Heage Lane, Etwall, Derbyshire.