"The dream is to have a team full of 'Scousers'. What we want to be is the sport for everybody with a Scouse soul." 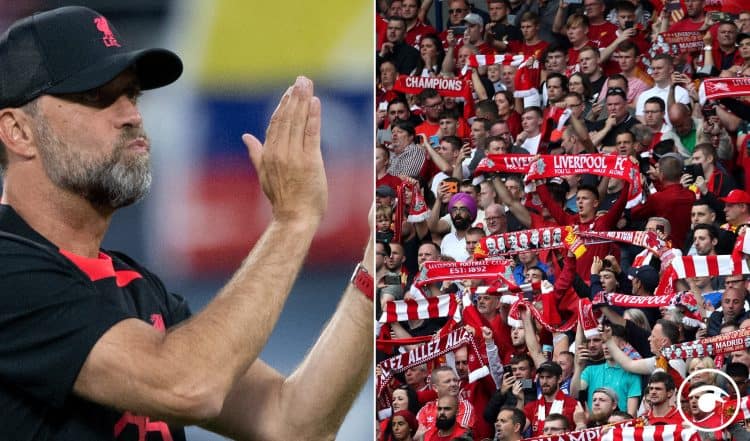 Liverpool boss Jurgen Klopp will have even more to be cheerful about today as striker Diogo Jota has signed a new long-term contract.

The 25-year-old, who joined the Reds in 2020, has committed his future to the club until 2027, the PA news agency understands.

Jota has been a star since arriving from Wolves, scoring 34 goals in 85 appearances, and was key to last season’s FA Cup and Carabao Cup double and run to the Champions League final.

Jota committing his future to the club cements his place in Liverpool’s new look front line following the recent arrivals of Darwin Nunez and Luis Diaz.

Mohamed Salah will continue to spearhead the attack, with Roberto Firmino another option, Sadio Mane having joined Bayern Munich earlier this summer.

Before we get to his quotes, get a load of Klopp’s streetwise action!

Here are his top quotes:

When he first came to Liverpool

“A message to those Liverpool supporters? We have to change from doubter to believer – now.”

“The EU is not perfect but it was the best idea we had. History has always shown that when we stay together we can sort out problems. When we split then we start fighting. There was not one time in history where division creates success. So, for me, Brexit still makes no sense.”

“I am not a dreamer. I am a football romantic.”

“In England, football is a big thing to talk about, but Liverpool, it’s a special place. You feel it when you make your first step.”

“I have a second pair of glasses, but I can’t find them. It’s hard to find glasses without glasses!”

“My father gave me some advice when I was very young – whatever someone tells you in the future, don’t forget Pele is the best.”

“I’m not skilled in a lot of parts in life but maybe I’m genius in understanding derbies because I didn’t need a second to understand how important this game is.

“I played a lot of derbies in my career and it’s this moment when the world around stops for 90 minutes in a specific city or region. That’s good because we all know football is not the most important thing in the world, but we love to think that in a few moments it is.”

“If I knew Alisson was this good, I would have paid double.”

“I was a very average player and became a trainer in Germany with a special club.”

Ahead of taking on Man City

“The dream is to have a team full of ‘Scousers’. What we want to be is the sport for everybody with a Scouse soul.”

“When the players go home, I can’t tell them what to do, so you need to create an atmosphere of trust. I don’t want to think, ‘What are they doing now? Do I need to call them?'”

“I heard from my agent that Liverpool is interested and I felt immediately, ‘Oh God’, it’s like when I met my wife – I saw her and thought OK, I marry her and it was like that with the club. It felt right from the first moment.”