It was a busy Easter weekend for the Pope at The Oval. 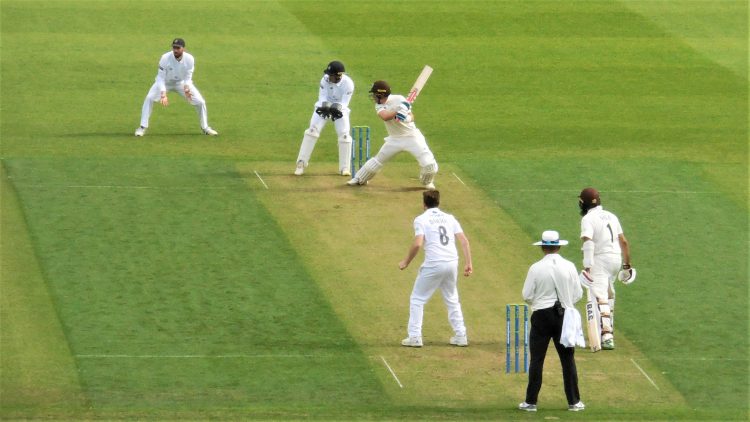 Hampshire elected to bowl on a green-tinged pitch and Surrey ended the first day on 312-3. Surrey tore into Hampshire’s top order despite Roach tearing a hamstring and, to some surprise, when left with only three frontline bowlers, enforced the follow on. Only Weatherley and Vince’s 100-run partnership in 19.3 overs, Hampshire’s longest stand of either innings, interrupted a steady procession of wickets.

In the first innings Pope took his first-class average against allcomers at The Oval to over 100. England fans must hope that he, or the England coaches, can find a way to translate such run scoring to the test arena. If someone like Pope cannot score runs for England, then English cricket does indeed have deep problems.

2. For the second week running a side came to London, inserted their hosts on a sunny day and ended up looking down the barrel of a big score at the end of day one, Derbyshire having done so last week at Lord’s. However Hashim Amla, who made 73, said after the close of the first day: “There was a lot in the wicket. On another day we could have been six or seven down.” Surrey would also have bowled if they won the toss. But by mid afternoon Fuller was bowling round the wicket to a semi bodyline field – leg slip, short leg and two men out for the hook.

3. Surrey were slow out of the blocks on the second morning and missed out on a fourth batting point by five runs, when they had needed only 38 runs from 14 overs on that second morning, which they reduced to a piddling 14 from 6. With this year 16pts for a win but now 8pts for a draw (a hangover from the Covid-era Bob Willis Trophy) chances are that more teams will tie on points for wins and draws – for example, 7 wins, 4 draws and 3 defeats equals the same aggregate points as 8 wins, 2 draws and 4 defeats in a way it used not to – so bonus points this season could be more often the decider than in previous years. So it seems careless to toss one away one so contemptuously.

4. Surrey’s innings accelerated after the bonus point cut off – the 110th over – had been reached and the most rollicking batting of the innings came from Will Jacks in the last-wicket stand. For a chunk of it, nine men were on the boundary for Jacks. This left huge gaps for a pushed two to keep the strike, but Jacks is a man of big hits. As he farmed the strike, this often resulted in a dot ball from a hit to a man on the boundary. But belated success with this tactic came with a driven six over extra cover followed by a hooked six next ball, both off Fuller. The last wicket put on 48 off 45 balls, of which the last man Taylor’s contribution was 0 not out from 14 of them.

5. Jamie Overton, whose 28th birthday was a few days before this match, bowled with great hostility, and impressive pace. An England future was once expected for him, and it may not yet be too late if he can stay mainly injury free. Not on this showing, and not with England’s aged and injury-prone bowlers.