Reflections from the opening game of the County Championship, as Middlesex take on Derbyshire at Lords. 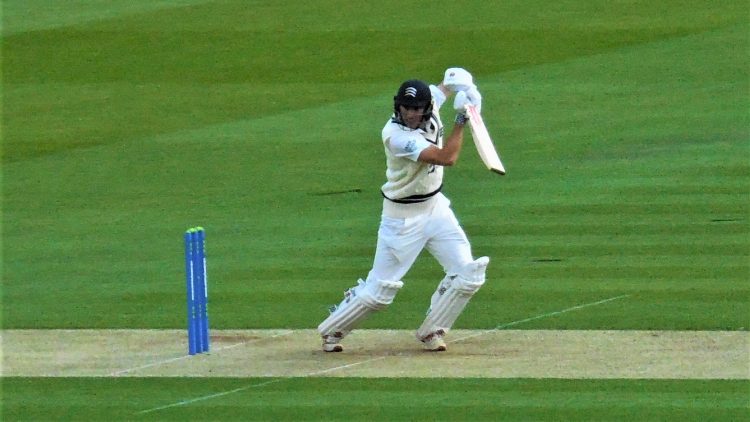 Put in on a sunny day with a bitter wind, Middlesex ended the day on 320-4 with neither pitch nor conditions offering bowlers much. Middlesex bowled better than the visitors, but also got little help from conditions and game and pitch seemed to be going to sleep. Then five wickets fell for no runs in 13 balls, starting with the last four Derby ones in nine balls. After some positive batting by Middlesex, Derbyshire, who have only successfully chased more than 300 in the fourth innings seven times in their history, were set a distant 356 from 88 overs.

1. Sam Robson’s thumb injury brought Josh De Caires, son of Mike Atherton and grandson of West Indian batsman Frank De Caires, into the eleven. This was the Leeds University student’s third first-class game and he scored an elegant first-innings 80. Prolific square on the off side, only one of his runs came in the V.

De Caires put on 186-runs for the second wicket with Eskinazi, who said of his junior partner: “He’s a phenomenally talented young player. Some of the boys said when he was hitting back-foot punches today that he did look a little bit like his old man.”

De Caires could become only the third man to play test cricket whose father and grandfather had also been test cricketers, following Dean Headley (son of Ron; grandson of George) and Bazid Khan (son of Majid, grandson of Jahangir.)

Such thoughts are premature and romantic – after all Middlesex were here a few years ago with Ben Hutton – but, on the first innings’ showing, a place in a future England side need not be overly fanciful. His second innings, bowled for a duck playing no shot, suggested he would be right at home in England’s current hapless batting line up.

2. Derbyshire’s coach Mickey Arthur said he could detect traces of Mike’s style in Josh’s batting, even though De Caires was not born when his father played his last match. Nor was De Caires born when teammate Tim Murtagh took his first first class wicket. In this game Murtagh took his 900th 7,961 days after that first one. Lord’s has been the venue for 334 of them, even though his first seven seasons were as a Surrey player. This is Murtagh 23rd season as a first-class cricketer.

3. Bonus points were introduced in 1968 to add interest. They certainly did in Middlesex’s innings. Entering the final over of bonus point territory, Middlesex needed 3 runs for a fourth batting point, Derbyshire a wicket for a second bowling one. Third ball of the over Derby got their bowling point: Simpson caught behind cutting off spinner Thomson. When Roland-Jones’ slog sweep was skied to slip running back, the three runs were needed from the last ball. Derbyshire made no attempt to prevent this by ringing the boundary and new batsman Tom Helm slog swept a four.

4. In contrast Derbyshire, with two batsmen set and needing 30 more runs from 11 overs for a third batting point, pootled unconcernedly to the end of the 110th over, 10 runs shy of a third batting bonus point.

5. A factor cited for why England’s test side is so lousy is that championship games are shunted to the season’s extremities. But this was no bowler-fest in a soft green pitch. It was a slow, low, true surface on which bowlers had to work for their wickets.

6. Caution – or maybe acceptance of the draw – infused both sides on the final day. A tough victory target became too distant once Shan Masood, who batted fluently in both innings and looks a good overseas acquisition, was out for 62 off 68 balls. But Middlesex, captained by Toby Roland-Jones after Murtagh left the field with a hamstring injury, were often reluctant to set attacking fields.

Related: Don’t Back Jonny: An alternative betting guide to the weekend’s football fixtures