It was my first day on the job but that wasn’t unusual as it was everybody’s first day on the job at MAYOUT, an organisation so new that we hadn’t even worked out just what the letters in MAYOUT stood for as an acronym. Jenkins, who had come to us from football after his great […]

by Hubert O'Hearn
in Satire 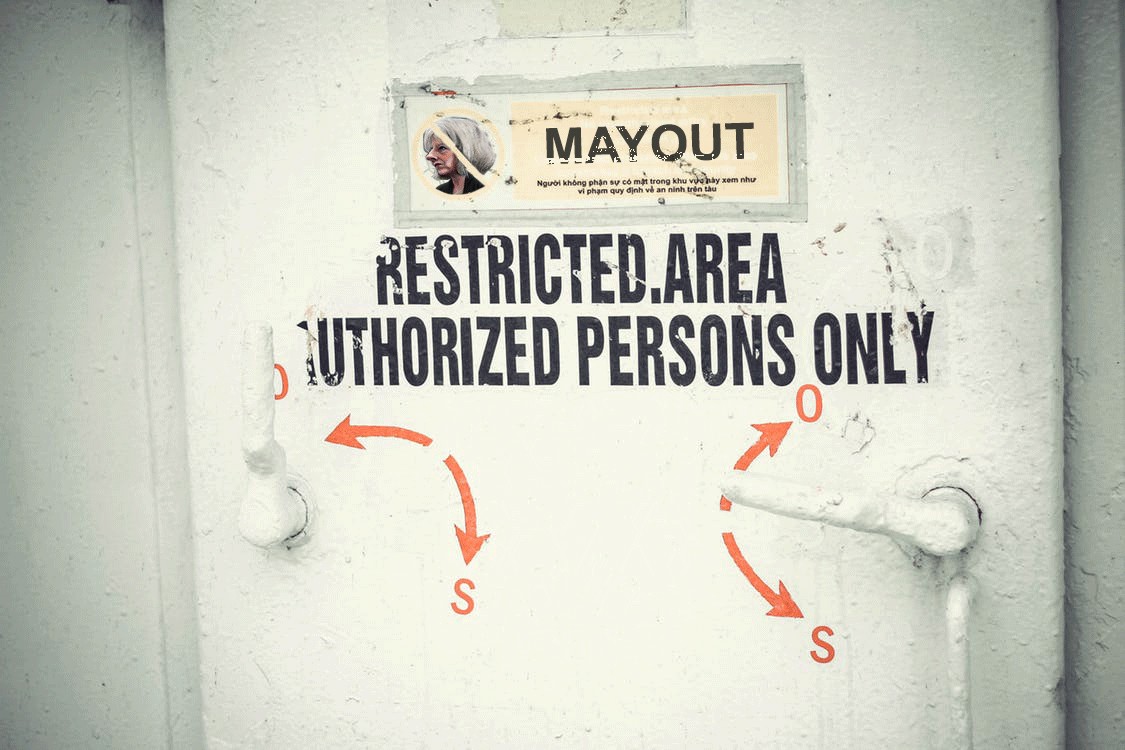 It was my first day on the job but that wasn’t unusual as it was everybody’s first day on the job at MAYOUT, an organisation so new that we hadn’t even worked out just what the letters in MAYOUT stood for as an acronym. Jenkins, who had come to us from football after his great success with the Sven Out, Moyes Out, Pardew Out and Wenger Out campaigns (granted that last one is TBA) suggested ‘Meeting All Yobs Outside Underwood’s Tavern’ however that made no sense until we realised he was just talking out loud while arranging a mates meet-up on SnapChat. And speaking of things with snap in their names, this snap election call by Mrs May had caught us all flat-footed, even our Treasurer Ms Daisy Llewellyn who usually preferred wearing heels.

Then there were other decisions to be made, including how to address this very report. Should it be addressed in order of Jeremy Corbyn, Tim Farron and Caroline Lucas, ranked by size of party and also by happy coincidence alphabetical? Ot was that by implication misogynistic, placing Ms Lucas last? Then there was the whole UKIP problem. Should we include them? That was solved easily enough when Henry Fitz-Taken from the Electoral History Division reminded the rest of us that it was a UKIP problem that had caused the former Prime Minister David Hameron, er, Cameron to put the whole country into the soup in the first place. Therefore we would do what Mr Cameron should have done which is to ignore UKIP. It was then and it was there, in our meeting room deep within the bowels of Westminster (no really, we were right next to the Men’s Lavs) when there came a scraping, squeaking, squawking noise and a TARDIS appeared in the corner! It obstructed the Fire Escape Route sign which was against regulations so it vanished again before re-emerging in front of the blackboard. This was much better as none of us had any idea how to use chalk.

Out of the TARDIS strode a tall man with shaggy hair, a long blue coat and fearsome eyebrows framing a fiery stare. Why, I would have thought it was Peter Capaldi’s identical twin brother except he doesn’t have one of those. I know this because I read Hello! magazine. And I watch The One Show. Research is my life. I keep my fingers on the pulse of the nation and never you mind where occasionally I find a strong pulse point. But I digress.

No, this was not Peter Capaldi’s non-existent identical twin brother striding out of a TARDIS in a meeting room next to the jacks in the stinky bowels of Westminster. Neither was it Doctor Who. No, this was (such a shame you can’t put ominous organ chords in writing, but imagine a bwaaahhh-bwahhhh-BWAHHHHH sound) The Thick of It’s Malcolm Tucker! We all did exactly what you would expect four dedicated social outcasts political activists to do under such circumstances. Everyone reached for their mobiles, gurned their best duck face and prepared for our selfies with the man, the myth, the icon.

Thirty seconds or so later after we’d picked up our damaged mobiles from where Tucker had thrown them he spoke. Or, well, he opened his mouth anyway and did speaky mouthy movementy things yet no sound came out. I would say that confusion reigned, except that despite my being an avowed socialist there’s a good tourist dollar to be made off the monarchy so God Save the Queen! Instead, confusion rained like the pipes in the lavatories next door until Mr Tucker played a most entertaining game of Charades with us with the phrase eventually solved as ‘I’m a copyright character and therefore can’t speak in this satiric story.’ Granted, satire is protected under legal precedent, but we had an election to fight and no one was in the mood to appear before the beak so we just pretended Malcolm Tucker wasn’t there at all. Which he wasn’t. No, I never said he was there. Just like Mrs May said on six occasions there would not be a snap election, which just like Julie Andrews in The Sound of Music leads us back to doh.

This left us to our own devices, yet as they had been broken by Malcolm Tucker (who wasn’t actually there regardless of what you may have heard – FAKE NEWS!) we were stuck with our wits. We considered ordering in Stephen Fry for four but decided against it as he’d make us all wear goggles and do unnatural things with playing cards. It was briefly debated that we just sit on our arses for six of the seven weeks playing a game of ‘Laura Kuenssberg/Robert Peston/Jon Snow/Kay Burley: Newsroom, Bedroom or Vroom Vroom?’ until Henry Fitz-Taken reminded the rest of us that hadn’t worked at all well for the Ed Miliband campaign in 2015. So there dropped a tombstone on that option.

After that we all sat in hunched postures around the conference table, silently considering options, not making eye contact, hearing only the soft ticking of the cock. Someone was in the toilet next door. The atmosphere couldn’t have been more ominous if it had been scored by Ennio Morricone.

Finally, I spoke up, although on the whole I feel it would probably be more valuable if I related what I said first before sharing what I spoke finally. ‘Hi, my name’s Hubert’ I said. No, I hadn’t yet introduced myself. I was born in Canada and was mortally afraid that someone might be offended if I had brazenly shoved my name on them as though it was something important for them to know. Canadians do modesty like ducks do feathers. Besides, we have a lot to be modest about.

‘Hi Bob!’ the other three said before downing shots which amazed me as one, where did they get shots from and why wasn’t included’ and two, how on earth did they know about drinking games based on 1970s American sitcoms? Such are the mysteries of our lives.

I had a plan which I had best tell you now as I told them then, because let’s be honest with one another – both Mrs May’s tenure as Prime Minister and Lord knows this story have gone on quite far enough. I began:

‘I think I might maybe have sort of an idea, eh?’ (Have I mentioned I’m Canadian?) ‘What do we think is going to be the main issue of this campaign? Tell me.’

The other three said, and silent Malcolm-Tucker-who-wasn’t-there all said or mouthed in one voice ‘Brexit!’ like a pub table at last orders. ‘Well, what does that mean?’ Disorder mumble, disorder mumble, disorder mumble, flush from the lav next door. ‘Exactly!’ I proclaimed in the all-knowing Professor who’s lost the answer key style. ‘No one knows what Brexit actually means. Elizabeth May doesn’t know what it means, Dave David doesn’t know what it means, Michael Gove only knows that it – or its opposite – means he won’t be Prime Minister, Boris Johnson only knows it means he can only shag (Snip! – Lawsuit Editor) and even Nigel Farage only knows it means that he can hang out with Donald Trump. All we know is that Brexit means we can be Trump’s ball washers!’ (I was alluding to golf, you naughty naughty people.)

‘Therefore, because Mrs May can’t define Brexit, we should define Brexit. And how? Wellll, there’s an old song by the O’Jays.’ At this point amidst confusion I had to explain that O’Jays, music were different from O.J.. matricide. ‘It’s called Give the People What They Want.’ At this point I sang the first line. At this point, feel relief that sound cannot be reproduced on the printed page.

‘Our advantage is in the leadership. Mrs May is saying, “Vote for me and i will order you to do what is best for you.” Well that’s your Mom, that’s your Nanny, that’s the teacher you hated in school! We’re saying, “You know best, decide your best.” We’re you’re Dad, we’re the cool teacher, we’re you’re first girlfriend (sorry Daisy … really? … oh, I didn’t know).”

And thus MAYOUT had a plan. Will it work? Well, no one knows at this point. But somewhere buried in all this is something. We can only hope it is something good, eh?