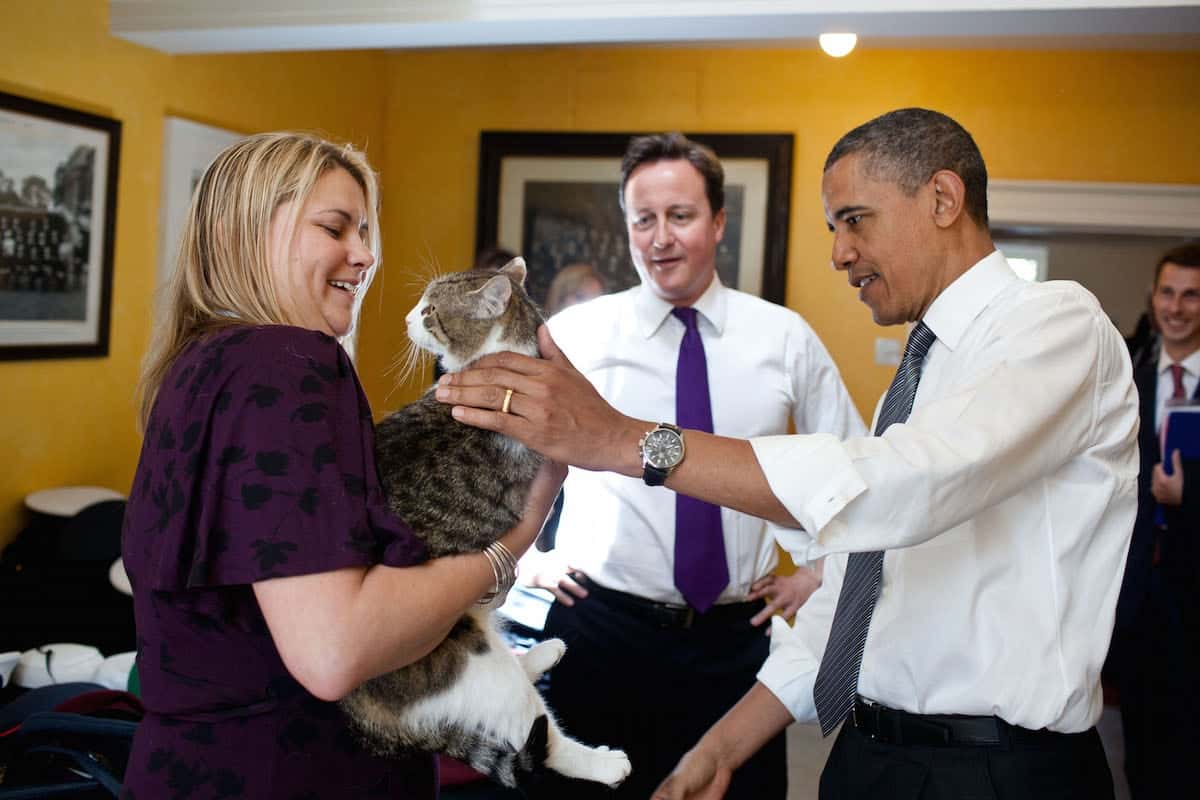 British Prime Minister David Cameron introduces President Barack Obama to Larry the cat at 10 Downing Street in London, England, May 25, 2011. (Official White House Photo by Pete Souza)This official White House photograph is being made available only for publication by news organizations and/or for personal use printing by the subject(s) of the photograph. The photograph may not be manipulated in any way and may not be used in commercial or political materials, advertisements, emails, products, promotions that in any way suggests approval or endorsement of the President, the First Family, or the White House.

Larry the rescue cat was adopted by No.10 from Battersea Dogs & Cats home as a kitten. Realising he needed a strong male role model staff paired Larry with the then Prime Minister David Cameron. The two quickly became inseparable.

The kitten was close to death when it was adopted by No.10 and David Cameron is said to have told Larry to ‘pick himself up, get off the couch and start contributing to the household’.

Larry was described by David as a “debt-addicted, welfare burdened, once great Tabby” when he first arrived, but now David is very proud of the great strides his little fluffy friend has made.

A No.10 spokesperson said: “David thought it was unsustainable to simply give Larry food so instead he loaned him some Purina One that he would only have to return once he was healthy enough to start making repayments”.

Larry was soon back on his own four paws and within weeks had implemented a plan to scrap the Feline Rights Acts and started lobbying to privatise local veterinary services.

The Spokesperson continued: “Larry wants to build a bigger and stronger cat society, but first he needs to implement a series of cuts to the No.10 armchair and sofa to help reduce the deficit. There simply isn’t enough money in the kitty.”

Larry quickly developed a tense relationship with Palmerston, the moggy at the foreign office. Staff say he was overheard telling Palmerston to “put on a proper coat, do up your collar and purr the national anthem”.