Mr Davis accused the council of choosing a "confrontational approach" which he claimed went against the climate emergency the authority has declared. 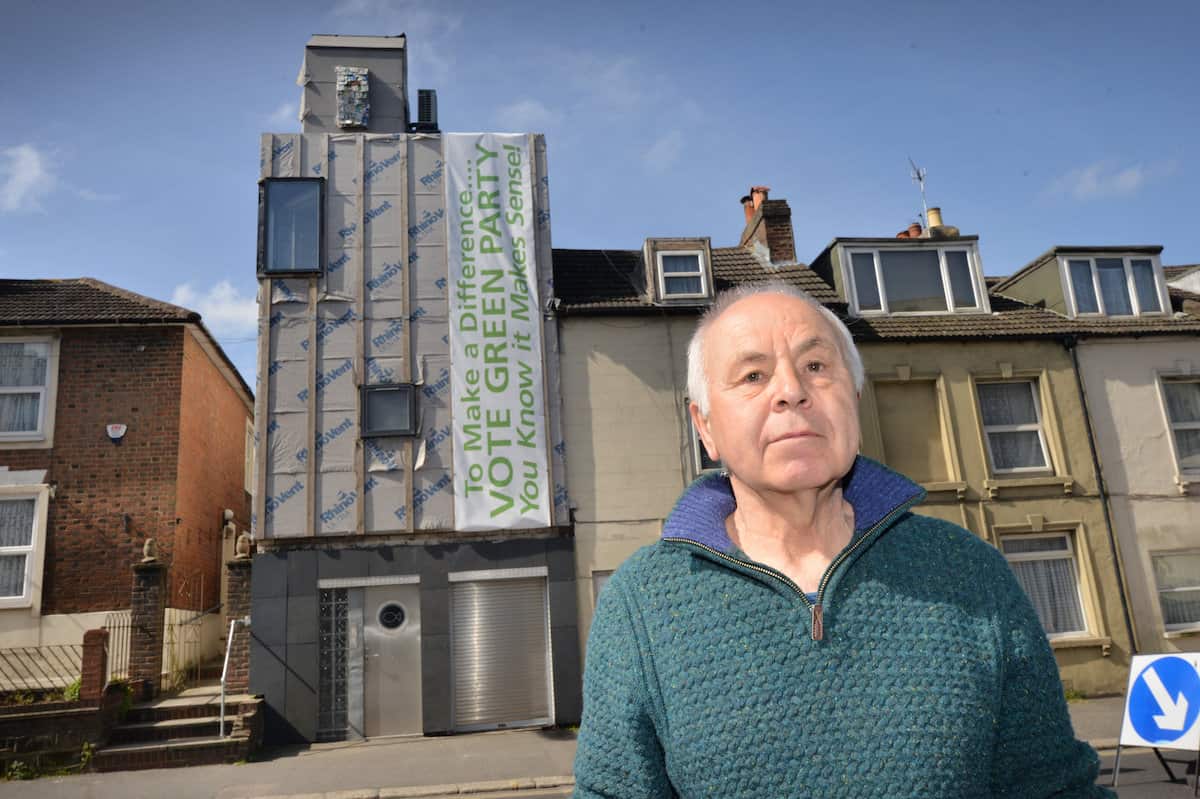 Ken Davis and his Zero carbon house in Bohemia Road, Hastings. See SWNS story SWNNeco. A green homeowner who is building the first zero carbon house in the area has been ordered to remove a storey of the renovation by the council. Ken Davis is doing up a house in St Leonards, East Sussex, to make it the borough’s first zero carbon home. But the project has been delayed after the local council asked him to get rid one storey of the building after an application to extend and alter the property was refused.

A green homeowner building the first carbon neutral house in the area was refused planning permission because it had a modern design.

Ken Davis was converting a home in St Leonards, East Sussex, into the first zero carbon house in the borough.

But he has been ordered to remove a storey of the green renovation by the local council after the authority ruled it was not in keeping with the surrounding area.

Hastings Borough Council said the planning application was refused due to a combination of the proposed size, scale, height, mass and elongated shape of the structure.

The authority added that the proposed roof slope and its “use of modern design and use of external modern materials”, as well as the size and location of the proposed window openings would have caused problems if constructed.

Also a proposed beach hut pod on the roof was another reason the council planning department turned down the scheme.

Hastings Borough Council said the application was turned down because the plan included work that had already been carried out.

Drawings of the plan showed the building was not in keeping with the surrounding area, the council added.

The planning notice refusing the application stated: “It is considered that a scheme as proposed in its ‘as built form’ and as shown on the proposed drawings is an incongruous form of development that is at odds with the rest of the two storey traditional terraces within the immediate area and streetscape and would fail to have regard to the site’s context harmful to the visual amenities of the area contrary to the National Planning Policy Framework (NPPF) policies and Local Plan policies.

“[Including] its elongated nature, the proposed roof pitch, its use of modern design and use of external modern materials.”

That was refused by the council and Mr Davis appealed the decision, but his appeal was later dismissed by the planning inspectorate, according to the council.

Mr Davis accused the council of choosing a “confrontational approach” which he claimed went against the climate emergency the authority has declared and “the need to improve the thermal performance of our building stock”.

He added: “I not only received an award from the Civic Trust for the proposal but have also had many positive comments from local people about what I am trying to achieve and, indeed, the original planning officer.

“If someone can explain the logic of HBC’s [Hastings Borough Council] actions against me I would appreciate an explanation, but perhaps it just fits with the same logic as building hundreds of new houses on flood plains when there are plenty of other places available.”

A spokesman for the authority said the refused application included “works that have already been carried out” on the building.

As a result, the council’s planning enforcement team is now investigating if any further action needs to be over the current state of the building, the spokesman added.

Mr Davis has now apologised to his neighbours or anyone who passes along the street outside for “the unfinished state” of his property.

He said removing a complete storey of the three-storey building would make it “lower than the original building”, which also had three storeys and was “unviable as a workable house”.

“This application was for ‘extensions and alterations to create a zero carbon two bedroom dwelling’. This application was refused in October 2020. The applicant then appealed the decision however the appeal was dismissed by the planning inspectorate.

“As the application which was refused included works that have already been carried out the Planning Enforcement Team are now pursuing the matter.”

Related: Couple move into Europe’s first 3D-printed house and rent is cheaper than one roll of PM’s wallpaper