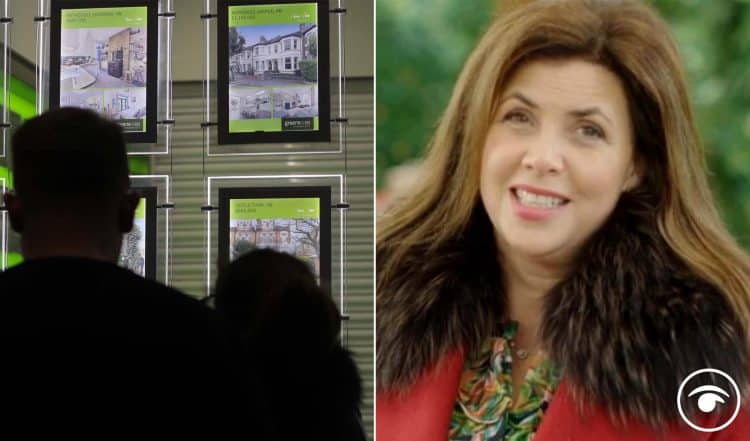 It comes after after the 50-year-old Location, Location, Location star, calling her ‘idiotic’ after she suggested that hopeful home-owners should give up Netflix and gym memberships if they want to buy a home.

Allsopp, who is the daughter of an Eton-educated Baron, also suggested that young people should move in with their parents or ‘find homes up north’ in cheaper areas if they are struggling to afford their lifestyles while saving for a house.

“Then I wait for her to respond to the entirely justified outrage by throwing her toys out of the pram and quitting Twitter again.”

But with household budgets under pressure from surging living costs, it is likely the pace of house price growth will slow considerably over the next year, Halifax said.

However the pace of monthly growth slowed in January, with values edging up by 0.3%, compared with 1.1% monthly increases recorded in both November and December.

House prices were up by 9.7% compared with a year earlier.

Russell Galley, managing director, Halifax, said: “Overall prices remain around £24,500 up on this time last year, and £37,500 higher than two years ago.

“Following the peak activity of 2021, transaction volumes are returning to more normal levels.”

“This situation is expected to become more acute in the short term as household budgets face even greater pressure from an increase in the cost of living, and rises in interest rates begin to feed through to mortgage rates.

“While the limited supply of new housing stock to the market will continue to provide some support to house prices, it remains likely that the rate of house price growth will slow considerably over the next year.”

Wales kicked off 2022 as the strongest performing part of the UK for annual house price growth, at 13.9%.

Northern Ireland continued to record strong price growth, with prices up by 10.2% compared with a year earlier.

Within England, the North West was the strongest performing region, with values up by 12.0% year on year on average.

Here are average house prices across the UK in January and the annual increase, according to Halifax: