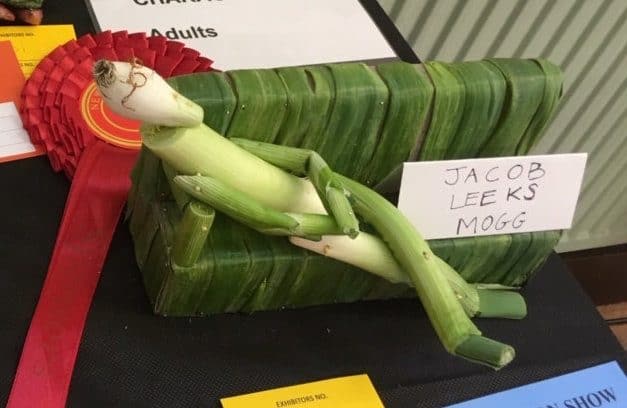 A creative mum-of-three bagged second prize at her town’s onion fayre – when she used leek and onions to recreate Jacob Rees-Mogg ‘vegging out’ in the House of Commons.

Earlier this month, the 50-year-old Leader of the House of Commons came under fire – and caused many Internet memes – for his relaxed slouching on a bench during a Commons debate.

But mum-of-three Hester, from Newent, Glos., has delighted in literally turning Rees-Mogg into a vegetable – as she entered the “Over-17s Vegetable Character” category at Newent Onion Fayre.

Hester used leeks to make her Jacob Rees-Mogg figure, and created the bench using the outer layer of spring onions.

“There’s so much depressing new around at the moment, I just wanted to give people a giggle,” said Hester, who runs a “nature explorers” group for young children in her town.

“I do it to make people smile. I’ve loved the glory of reading people’s comments about it on social media. It’s so lovely to have such a small town talking about it,” she added.

Hester said she only came up with the idea for the vegetable character on Friday night – the day before the Onion Fayre – and within a couple of hours she had completed it.

Her Jacob Rees-Mogg figure is made from a small leek, whilst the bench is made from spring onions, wrapped around an Oasis flower-arranging block and pinned in place with dress pins.

And this is not the first time Hester has bagged a top spot at the Onion Fayre – also winning a second-place rosette two years ago, and getting ‘Highly Commended’ the year before that.

Hester said: “I’ve entered the show every year for about five years now. I love doing it. I’m not going to stop.

“We’ve got quite a few rosettes around the house now, because my three children used to get involved in the children’s categories when they were a bit younger.”

Hester came second to a ‘bearded lady’ with a bra made from cloves of garlic, called Fennel von Garlic.

And, as well as her blue rosette, she was presented with a Crunchie chocolate bar as a second-place prize.