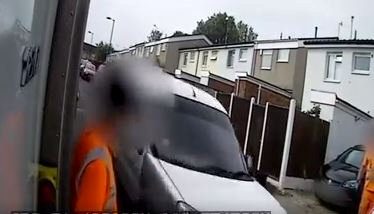 Bristol Waste Company’s new video compilation shows seven incidents in just a one-month period where bin men have had to flatten themselves against the collection lorry to avoid impatient drivers.

The footage shows cars, vans, and motorbikes mounting the pavement or squeezing past parked cars to get past the bin lorry – just seconds after the lorry has stopped to do its job.

And, in one particularly jaw-clenching clip, a van mounts a pavement to squeeze past the bin lorry – and almost gets stuck between the lorry and a wall.

The lorry driver can be seen reaching out of his driver window to move his wing-mirror so that he can fit through the tight space.

Bristol Waste have released the footage, filmed on new 360-degree cameras, to highlight just how common this dangerous driving is on the streets of Bristol.

The waste company is currently in talks with Avon & Somerset Police about using the video to aid successful prosecutions for dangerous driving, and hold dangerous drivers to account.

Jason Eldridge, Operations Director at Bristol Waste, said: “It is a serious concern for our crews and members of the public.

“What was most shocking about the footage was seeing that our crews didn’t even react. This happens so often they just accept it as part of their job.

“While our work ensures materials get a second life, our crews only have one. Please be patient – dangerous driving costs lives.

“Our crews are working as quickly as possible to collect your recycling and move out of your way.

“Residents can do their bit to help too,” Mr Eldridge added.

“A well sorted recycling box can not only help increase recycling rates, but it will also help crews sort the boxes more quickly, and help us move out the way in less time.”

The Bristol Waste director said, on average, a messy recycling box will take 120 seconds for a crew member to sort.

But when the materials are well separated, the collection process takes just 40 seconds.

If every box was sorted, hours of labour could be saved, traffic could be eased, recycling rates increased, and the city could save valuable funds.

Driving on the footway (or pavement) is an offence under section 72 of the Highways Act 1835 and is also prohibited by rule 145 of the Highway Code.