Other images projected onto the Castle Rock also read "They're Lying" and "No one voted for this." 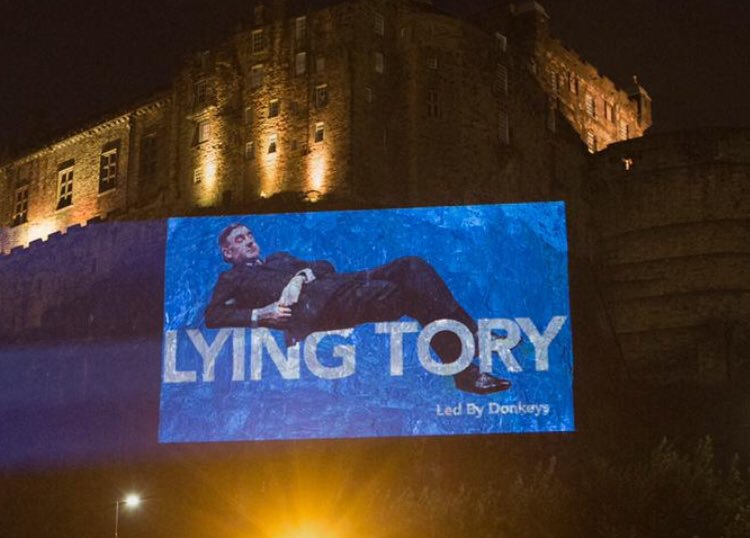 Edinburgh Castle was lit up last night with a giant picture of Jacob Rees-Mogg reclining in the House of Commons.

The projection featured the Brexiteer above the words “Lying Tory”.

Other images projected onto the Castle Rock also read “They’re Lying” and “No one voted for this.”

Rees-Mogg came under fire on Tuesday for slouching on the green benches during a crucial debate on legislation to prevent a No Deal Brexit.

His unusual posture quickly became a meme, and inspired the campaign group Led By Donkeys for the Edinburgh Castle stunt.

The campaign group have previously put up billboards featuring Rees-Mogg and Nigel Farage around Edinburgh.

They also took over the Angel of the Nort, with “Get Ready for shortages of fresh food and price increases” and “Stop Boris” projected onto the statue.

Earlier this week a portrait of Michael Gove was drawn on the sand on the North Yorkshire coast.

Reminding the Chancellor of the Duchy of Lancaster of his previous stance on a hard exit, the artwork – which can be seen from space – read:

“We didn’t vote to leave without a deal”.

It echoes projections of Amber Rudd shown in her constituency of Hastings which carried the usual “hypocrisy warning”.

Muse Head into the Studio