Former student Simon Crowther has written an open letter to his local MP regarding being mis-sold his student loan at a young age, of which the terms have now been changed by the Government.  The letter has since gone viral on Facebook and other social media sites and will strike a chord with millions of students […] 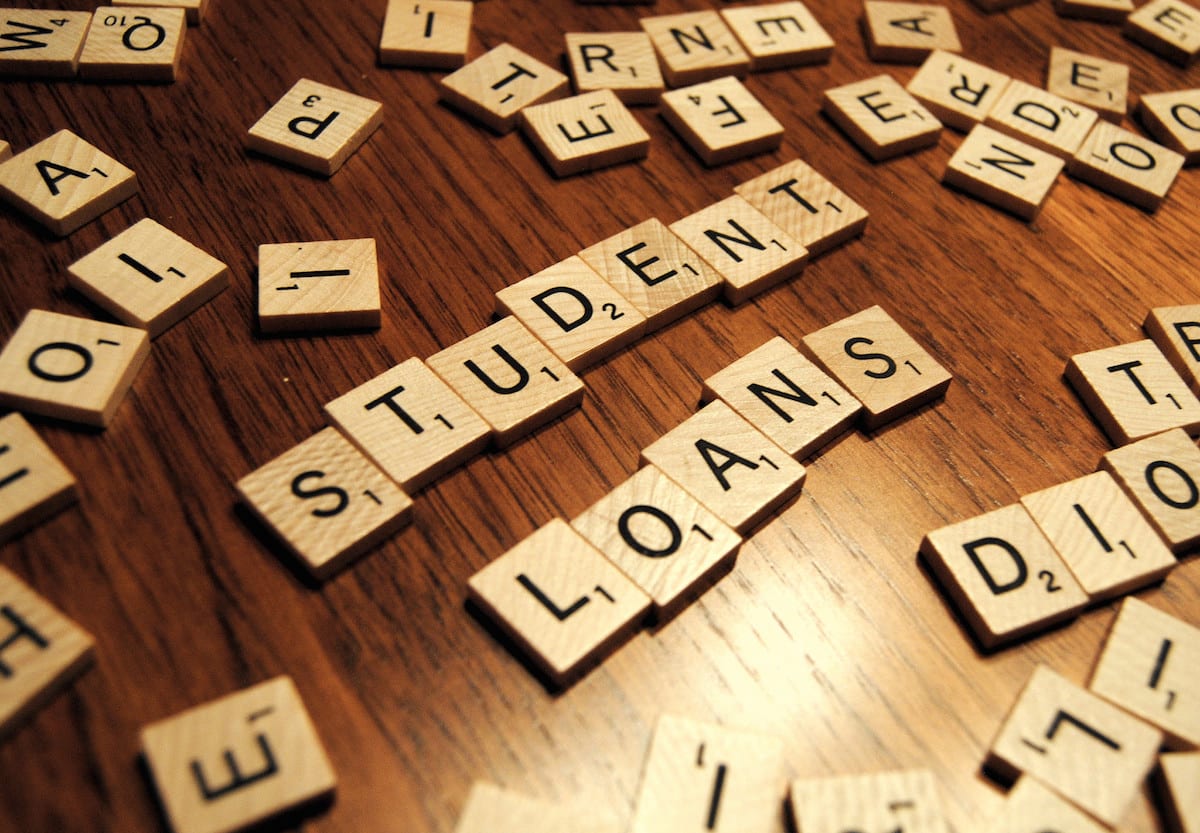 Former student Simon Crowther has written an open letter to his local MP regarding being mis-sold his student loan at a young age, of which the terms have now been changed by the Government.  The letter has since gone viral on Facebook and other social media sites and will strike a chord with millions of students and former students.

STUDENT LOAN DEBACLE. I’m sure a lot of you are in the same situation as me. Please read and see if you agree with me…

Below is an Open Letter, written to my MP, Mr. Vernon Coaker:

This is an open letter to you as my Member of Parliament. I would greatly value your support and I have no doubt, so would the other thousands of young graduates in my position.

I took out a student loan at the age of eighteen to study Civil Engineering at the University of Nottingham. Unfortunately, I was in the first cohort year of undergraduates who were charged the increased fees of £9,000 per year, from £3,000 – a huge hike in student fees. When I took out the student loan, we were told the loan was at a very low interest, and at the time was around 0.5%.

I was still in the Sixth Form at school, when I agreed to the student loan. I had no experience of loans, credit cards or mortgages. Like all the other thousands of students in the UK, we trusted the Government that the interest rate would remain low – at around 0-0.5%.

I graduated with a huge debt of around £41,000.
We have just learned of the underhand way, the Government has sold our loans to a private company which has caused the interest rate to skyrocket. At no point was I consulted about this, and of course I would never have agreed to this enormous increase in fees.

Now graduates, we feel we have been cheated by a government who encouraged many of us to undertake higher education, despite trebling the cost of attending university.

The current interest rate is now around 3.9%. We were told our loans were around 0.5% interest. I am now lucky enough to own a property, and my mortgage is around 3% – less than my student loan.

From the attached image you will see some months the interest on my student loan is over £180.

The student loan repayment is currently 9% of anything over £21,000. The total interest on my debt between March 2015 and March 2016, is £1,828. Below is a simple calculation to see how much I would need to earn, just to cover the interest in a year:

Unless I earn that much, my student loan will increase due to the interest.

I would like to know how many new and recently qualified graduates are earning over £41,000? I am only 22 years old and out of university less than a year.

I have actually set up my own business and have been able to employ two people! As I am employing two people my own salary is lower, which means my student loan will be increasing due to the interest.

I feel we have been mis-sold the loan. A commercial firm would not be allowed to buy loans from another company and then hike the interest rates. This is not what I and thousands of others signed up to. How can it be allowed? How can our loan agreements be altered without our prior knowledge. This is a disgraceful act by a government which encouraged us when at school, to go on to higher education – helped by a government loan with the promise of a low interest repayment scheme. Along with many of my former university colleagues, we have lost our trust in this Government. We have been told that as graduates, we are the future leaders of the country in politics, engineering and commerce.

I trust when our generation reaches parliament, our future government is never so short sighted as to treat their “future leaders” in such an underhand way.

Mr Coaker, I am putting this to you, in the hope you will be able to bring some pressure to bear on the outrageous situation this government has now left me and my generation in, after the hike in interest on our already large student loans and without our prior knowledge. This is not the way to keep our future leaders’ trust……..or votes.

I look forward to hearing from you and I value your support. 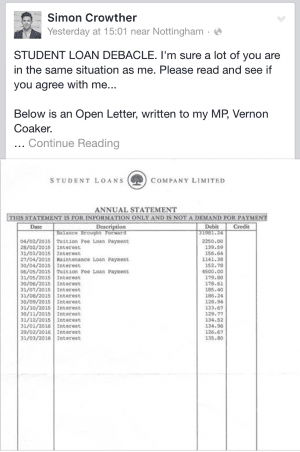 Crowther was among the first intakes of students required to pay £9k in tuition fees. Like many students he funded himself through University using a student loan from the Government backed ‘Student Loans Company Limited’.

In the letter he complains about the the sale of the £100bn student loan book to the private sector and claims he was mis-sold the loan at a young age with rhetoric that the interest rate would always remain extremely low, and he would only have to pay back the loan when he reached a certain income level.

Apart from the promises of low interest rates, what really sold the loan idea was the fact that the scheme was run by the Government.

The loans have since been sold to the private sector and Crowther’s interest rates have soared.

I was actually also one of the first students required to pay £3k in tuition fees, leaving with a Student Loans Company Limited debt of £13k.  Sixteen years later, I’m still paying the loan back and the interest is now increasing.  I’ve always been shocked by the amount of interest added to the loan each year, and it certainly wasn’t the message I was given when taking out the loan. I can only imagine the stress caused with a student loan of £41k or more.

Maybe it’s time we asked ourselves if we were mis-sold our loans in the first place?