“At least this could shield western Ukraine so that these children, with women, could come to the border. It’s impossible now to cross the border." 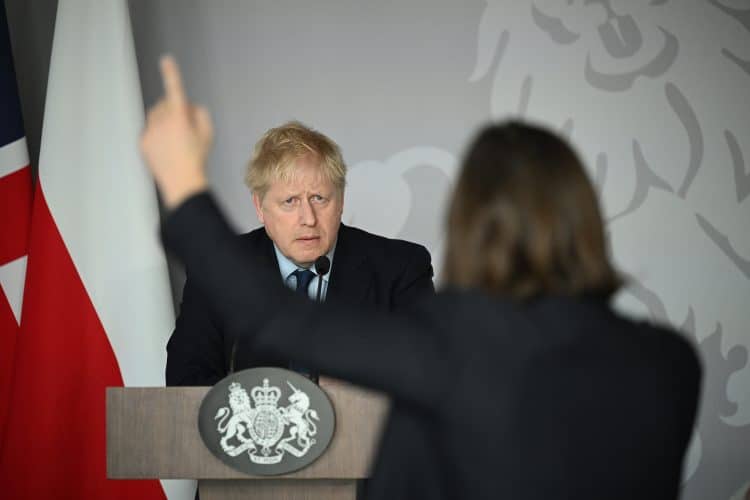 Boris Johnson takes a question from Ukrainian journalist Daria Kaleniuk during a press conference at the British Embassy in Warsaw.

Boris Johnson has been taken to task by a tearful Ukrainian journalist over the West’s failure to stop “barbaric” Vladimir Putin.

The prime minister was accused of being “afraid” to defend people during a press conference on a visit to Poland on Tuesday.

Daria Kaleniuk – the head of a Ukrainian anti-corruption organisation – said told Johnson he was not going to Kyiv “because you are afraid”.

In an extraordinary intervention, she said: “You’re talking about the stoicism of the Ukrainian people. But Ukrainian women and Ukrainian children are in deep fear because of bombs and missiles from the sky.

“And the Ukrainian people are desperately asking for the West to protect our sky. We are asking for the no-fly zone, we are seeing the response that it will trigger World War Three, but what is the alternative, Mr Prime Minister?

“To observe hour our children, instead of planes, are protecting Nato from the missiles and bombs? What’s the alternative for the no-fly zone?

“We have planes here, we have an air defence system in Poland, in Romania. Nato has this air defence.

“At least this could shield western Ukraine so that these children, with women, could come to the border. It’s impossible now to cross the border.

And she berated Johnson for not doing more to clamp down on Russian oligarchs, including Roman Abramovich.

“Because Nato is not willing to defend, because Nato is afraid of World War Three. But it has already started and it is Ukrainian children who are there taking the hit.

“Why aren’t all these mansions seized? I don’t see that! I see that my family members are saying that we are crying, we don’t have anywhere to run. This is what is happening, prime minister.”

Johnson responded that he “can’t pretend” that the West would step in militarily.

“Unfortunately the implication of that would be that the UK would be engaged in shooting down Russian planes, engaged in direct combat with Russia, that’s not something we can do,” he said.

Related: ‘We have to do something’: Robert De Niro calls out Russia invasion