Lord Moylan scoffed at the idea that Boris Johnson read his own lockdown rules on LBC. 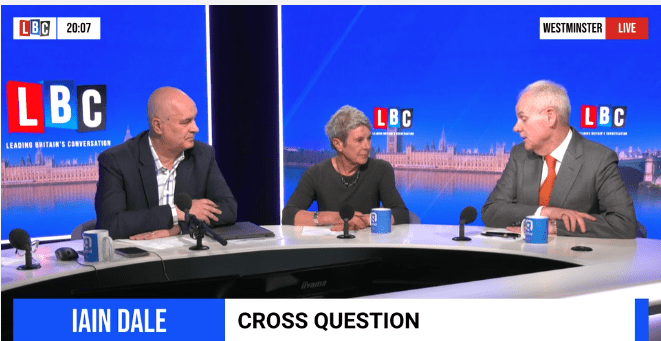 As Boris Johnson faces questions over his premiership amid the Partygate fallout, a Tory peer has insisted that the prime minister did nothing wrong.

In a letter to her constituents, Dame Andrea said the “extent and severity” of the rule-breaking in No 10 exposed in the Sue Gray report meant it was “extremely unlikely” the senior leadership did not know what was going on.

“The conclusion I have drawn from the Sue Gray report is that there have been unacceptable failings of leadership that cannot be tolerated and are the responsibility of the prime minister,” she said.

But, in a jaw-dropping exchange on LBC, Lord Daniel Moylan claimed that Johnson had done nothing wrong – adding that there was “no prohibition” on parties during the Covid lockdowns.

Speaking with Iain Dale, Lord Moylan said: “I don’t think he regarded it as a party at the time, but as a legitimate work activity.”

Asked whether a leaving do was “reasonably necessary”, the peer replied: “You could see how somebody could take the view [that leaving parties] might be regarded as necessary [to work].

“It wasn’t a straightforward ‘you cannot go to a party.’”

Watch the shocking exchange below.