"Every Lib Dem victory now has to involve a stunt straight out of The Thick Of It." 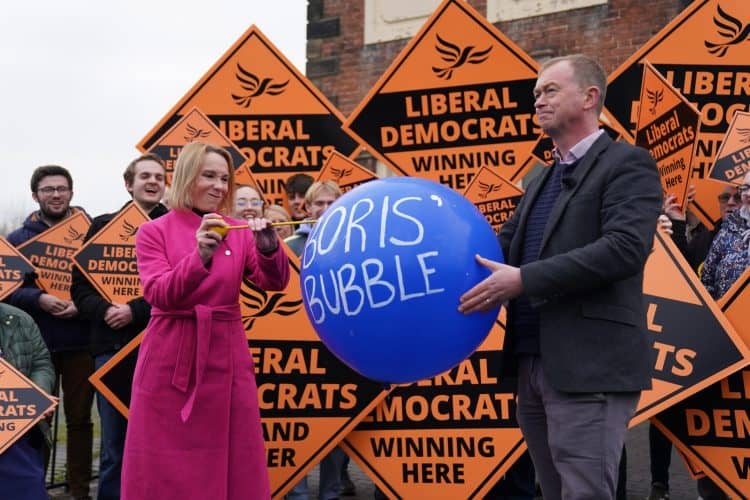 Senior Tories have put Boris Johnson on notice that his leadership is on the line after the party’s crushing defeat in the North Shropshire by-election.

The Prime Minister suffered another body blow to his authority as the Liberal Democrats overturned a massive Conservative majority to take the seat by almost 6,000 votes.

The result sent shock waves through Westminster after weeks of damaging headlines about Tory “sleaze” and reports of partying in No 10 in breach of Covid restrictions last year.

The Lib Dem candidate Helen Morgan took the seat with 17,957 votes, pushing Tory Neil Shastri-Hurst into second place on 12,032, with a 34% swing to the Lib Dems – the fourth largest in a by-election in the last 30 years.

Coming after the party’s’ victory earlier in the year in the Chesham and Amersham by-election, where they overturned another big Tory majority, Lib Dem leader Sir Ed Davey said it was a “watershed moment” in British politics.

“We’ve now this year beaten the Conservatives in two of their safest seats,” he said.

“Liberal Democrats have proven the Conservatives can be beaten anywhere. And I think people are so fed up with Boris Johnson, so fed up with his incompetence and his behaviour, I think they’ll be really happy about that.”

For Labour, shadow business secretary, Jonathan Reynolds, said it was a “terrible result” for the Conservatives.

He told BBC Breakfast: “Clearly, people have wanted to send a message to the Government they’re fed up with the incompetence, the sleaze, the kind of revelations we’ve seen over the last few weeks.”

The newly-elected MP for the Midlands constituency Helen Morgan appeared on live TV to celebrate the win in by literally bursting a big blue “Boris bubble”.