John Penrose accused Johnson of breaking the Ministerial Code - and told him to resign. 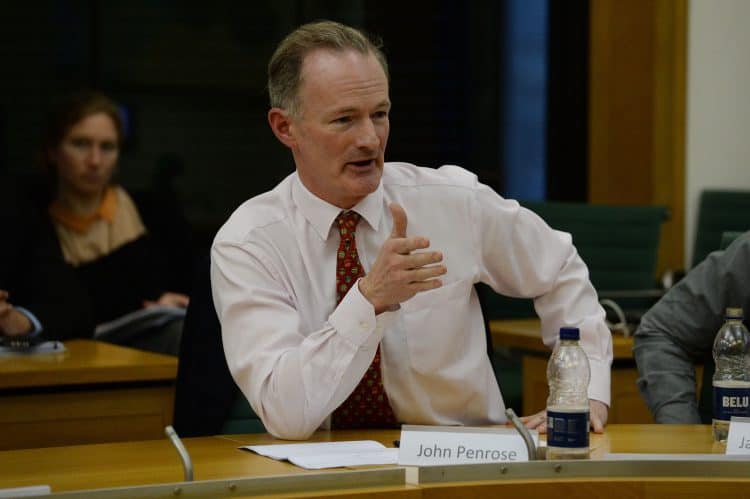 Boris Johnson’s own Anti-Corruption Tsar has resigned, accusing him of breaking the Ministerial Code and telling him to resign.

John Penrose – the wife of Baroness Harding, who fronted the Government’s controversial Test and Trace programme – said on Monday that it was “pretty clear” Johnson had broken the code.

“That’s a resigning matter for me, and it should be for the PM too,” he added.

Penrose’s intervention comes just hours before Johnson faces a vote of confidence by Tory MPs on Monday evening as discontent over the lockdown-busting parties in No 10 and the direction of the Prime Minister’s leadership reached a tipping point.

The Prime Minister was informed on Sunday that he would face the vote after Sir Graham Brady, the chairman of the backbench 1922 Committee, confirmed he had received the 54 letters from Conservative MPs needed to trigger the ballot.

In a letter to the Prime Minister, Penrose – the MP for Weston-super-Mare – said his reason for stepping down was a note written by Johnson to Lord Geidt, his Independent Adviser on the Ministerial Code.

“The only fair conclusion to draw from the Sue Gray Report is that you have breached a fundamental principle of the Ministerial Code – a clear resigning matter,” he wrote.

“But your letter to your Independent Adviser on the Ministerial Code ignores this absolutely central, non-negotiable issue completely. And, if it had addressed it, it is hard to see how it could have reached any other conclusion than that you had broken the code.”

He added: “I hope you will now stand aside so we can look to the future and choose your successor.”

Johnson will address the 1922 Committee at 4pm on Monday as he battles to save his premiership and has also written to all Tory MPs.

In an indication of the anger felt on the Tory benches, former minister Jesse Norman – who had been a long-standing supporter of Johnson – published a scathing letter to the Prime Minister withdrawing his support.

Norman said the Gray report showed Johnson “presided over a culture of casual law-breaking at 10 Downing Street” and “to describe yourself as ‘vindicated’ by the report is grotesque”.

But his criticism of Johnson was far broader, including the “ugly” policy of sending migrants on a one-way trip to Rwanda, the “unnecessary and provocative” privatisation of Channel 4, the ban on noisy protests which “no genuinely Conservative government” should have introduced, and the lack of a “sense of mission” in his administration.

“You are simply seeking to campaign, to keep changing the subject and to created political and cultural dividing lines mainly for your advantage, at a time when the economy is struggling, inflation is soaring and growth is anaemic at best,” Norman said, warning that Johnson continuing in office would be “potentially catastrophic for this country”.

Former foreign secretary Jeremy Hunt, who stood against Johnson for the leadership in 2019, warned that the Tories would lose the next general election if the Prime Minister is allowed to remain in post.

“Having been trusted with power, Conservative MPs know in our hearts we are not giving the British people the leadership they deserve. We are not offering the integrity, competence and vision necessary to unleash the enormous potential of our country,” he said.

“And because we are no longer trusted by the electorate, who know this too, we are set to lose the next general election.”

He added: “Today’s decision is change or lose. I will be voting for change.”

Related: Starmer calls on Tories to act in ‘national interest’ and boot out Boris