Regardless of whether Johnson wins, Starmer said "history tells us that this is the beginning of the end". 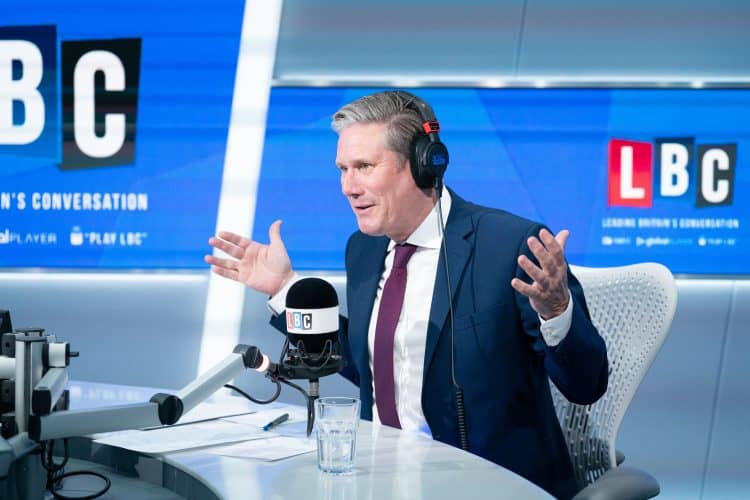 Sir Keir Starmer has said Conservative MPs should act in the “national interest” by voting “no confidence” in Boris Johnson.

The Labour leader said the Prime Minister has lost the trust of the public and has made a “big mistake” by trying to cling to his job.

It comes after the 15 per cent threshold of Tory MPs to submit letters of no confidence was reached over the weekend, triggering a vote in the House of Commons.

Speaking to LBC Radio on Monday, Sir Keir said Conservative MPs “have got to show some leadership and vote against the Prime Minister”.

He said: “He has lost, I think, the trust of the country – that is pretty clear from the evidence that I have seen.”

Referring to Jesse Norman’s statement on Monday morning, in which the Conservative MP spoke out against Mr Johnson’s leadership as a whole, Sir Keir added: “He’s also got no plan for the country and I think those two things mean that it’s in the national interest that he goes now.”

The Opposition leader said many people in his party say it is “very good” for Labour if Mr Johnson stays because he is “so damaged”.

“But looking at the national interest, I think Tory MPs have got to step up, show leadership and get rid of him,” he added.

Sir Keir also said the public mood has changed with a “general sense that this man doesn’t really tell the truth”.

He said: “I think the mood has changed. I think the public have made their mind up about this man.

“They don’t think he’s really telling the truth about many, many things – not just partygate – but just the general sense that this man doesn’t really tell the truth, (he) can’t be trusted.”

He added: “We’ve got a Prime Minister trying to cling on to his job and most people would say: ‘Your job is to help me through the cost-of-living crisis and you’re not doing it because you’re distracted.’”

Sir Keir said that even if Mr Johnson wins, “I think history tells us that this is the beginning of the end”.

“If you look at the previous examples of no confidence votes, even when Conservative Prime Ministers survived those, (and) he might survive it tonight, the damage is already done and usually they fall reasonably swiftly afterwards,” Sir Keir said.

‘Do the right thing’

The Labour leader later argued that he is “different” from the Prime Minister as he reiterated his pledge to step down from his role if he receives a fixed penalty notice from Durham Police.

Asked on LBC radio about the incident where the Labour leader was pictured drinking a beer with colleagues during a meal break while campaigning during lockdown, Sir Keir said: “I am absolutely clear that there was no breach of the rules.

“In my case, we were on the road with a team. We stopped for something to eat. There was no breach of the rules and I’ve made that clear over and over again.”

But he added that if the police issue him with a fixed penalty notice, “I will do the right thing and I will step down because it’s very important, I think, for everybody to hear and to know that not all politicians are the same.

“I think the Prime Minister has made a big mistake by trying to cling on in relation to the law-breaking that we know went on in Downing Street.

“I’m different – and if that fixed penalty notice is issued then I will step down from my posts because I do believe that democracy relies on integrity and honesty, and I hold others to high standards so I’m going to hold myself to those high standards.”

Related: Thousands of Brits begin four-day week pilot – with no loss of pay