“The leadership of Boris Johnson this country has had has been so brilliant," he told reporters stationed outside No 10. 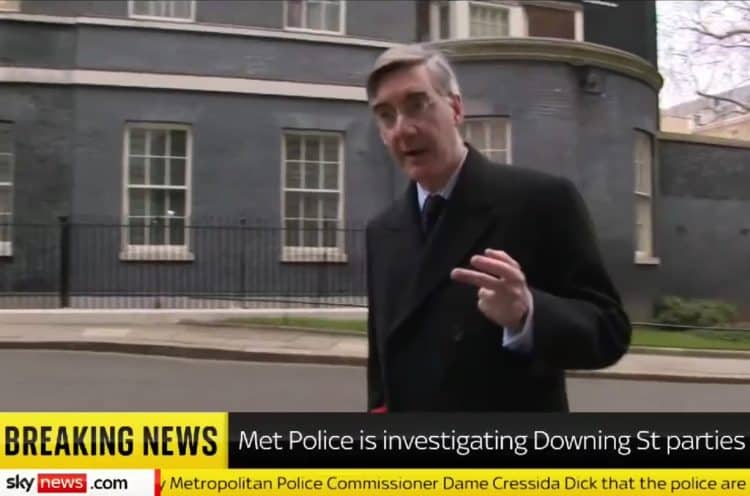 Jacob Rees-Mogg has stepped in to defend the prime minister’s record after a police investigation was launched into the PartyGate scandal that has rocked his premiership.

After leaving a Cabinet meeting, he told reporters in Downing Street: “The leadership of Boris Johnson this country has had has been so brilliant – that he has got us through this incredibly difficult period and he’s got all the big decisions right.”

He added that he was “honoured to be under his leadership” in an impassioned defence.

Cabinet members ‘kept in the dark’

According to reports Johnson kept Cabinet ministers in the dark over the police investigation, meaning Rees-Mogg was likely unaware of the developments when he confronted the cameras.

The PM was aware that the Metropolitan Police officers had begun their work but decided against telling his top team when they met on Tuesday.

Their phones surrendered before entering the Cabinet Room, ministers were unaware of the dramatic development outside when commissioner Dame Cressida Dick had announced the investigation was underway.

Downing Street said Mr Johnson judged it was best not to tell them about the “sensitive” matter because he did not want to “pre-empt a police statement”.

Though it is not entirely clear who knew what and when, ministers are unlikely to have known about the development for a full 20 minutes as the rest of Westminster reacted.

The first sign that the Metropolitan Police chief was planning to announce the investigation into alleged Covid breaches at the heart of Government was at 9.28am, when the move was reported by the Guido Fawkes website.

The Cabinet meeting began two minutes later, but ministers would have given up their phones as in normal protocol.

It would not have been until 10.30am when the meeting finished that Cabinet members began receiving back their phones to learn the news announced at around 10.11am.

Related: EU citizen who faced UK citizenship hurdles warns: ‘It can be removed on a whim’