During the penultimate episode of Mock The Week, Ed Byrne took a sweary swipe at the political influence which has 'taken the BBC hostage'. 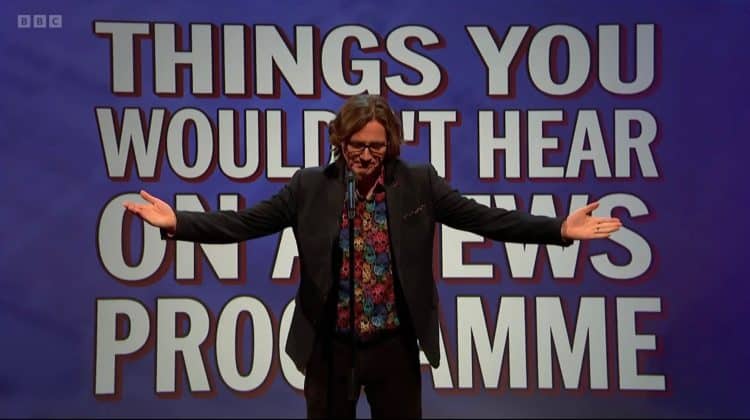 To quote Ed Byrne, the Irish pun-slinger ‘went down swinging’ on Friday night. In what was his last-ever appearance on Mock The Week, and possibly the BBC itself for a little while, the comic took a swipe at the people in charge of the state broadcaster.

Ed Byrne blasts BBC, and the ‘Tory c***s’ running it

We say ‘took a swipe’. That’s probably the understatement of the century. Byrne absolutely annihilated the sorry situation at the Beeb, labelling those at the top as ‘a miserable bunch of Tory c***s, who can’t take a f***ing joke.’

For years, the BBC has become a major battleground for the so-called ‘culture wars’. Many critics believe the network has a left-wing bias, despite mountains of evidence to the contrary. Recently, senior figures linked to the Conservative Party have been appointed to top roles.

And, wouldn’t you know it, government-critical shows like The Daily Mash and Mock The Week have met their demise. As far as Ed Byrne and the show’s legion of loyal fans are concerned, this is not just merely a coincidence.

During the extremely popular ‘Scenes We’d Like To See’ round, which has been an ever-present feature in the show’s 17-year run, guests on the panel were encouraged to come up with ‘Things You Wouldn’t Hear On A News Programme’.

Sure enough, Ed Byrne saw an opportunity to go out in a blaze of glory. Not only was this his curtain call, but Mock The Week will broadcast its final episode next Friday. Since its debut in 2005, we doubt there have been many jokes as cutting as this.

This is how you sign-off. Bravo, Mr. Byrne!

“A report just coming in: Apparently, Mock The Week has been cancelled because the BBC has been taken hostage by a bunch of miserable Tory c***s who can’t take a f***ing joke!” | Ed Byrne