Labour lashed out at an "empty speech that will hugely disappoint" thousands of patients waiting for treatment. 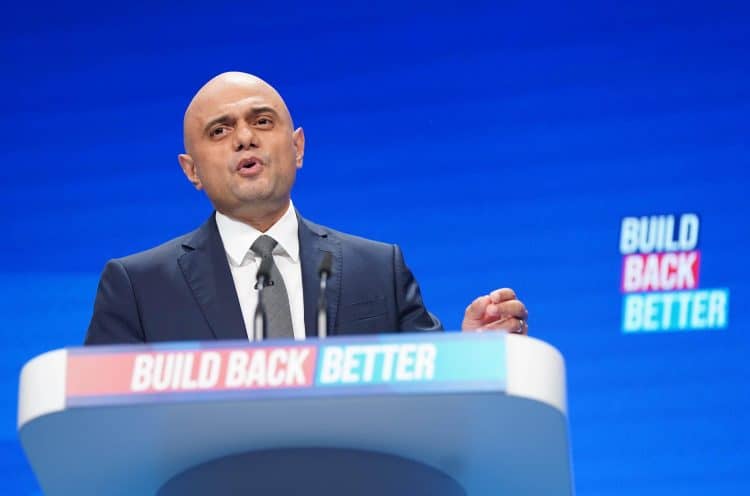 Sajid Javid has said health and social care “begins at home” – and people should relay on their families instead of the state.

The health secretary’s comments came during his speech at the Conservative Party conference in Manchester on Tuesday.

Javid said: “The state was needed in this pandemic more than any time in peacetime. But government shouldn’t own all risks and responsibilities in life. We as citizens have to take some responsibility for our health too.

“We shouldn’t always go first to the state. What kind of society would that be? Health – and social care – begins at home. Family first, then community, then the state.

“If you do need support, we live in a compassionate, developed country that can afford to help with that. There are few higher callings than to care for another person.”

He said the public “rightly and proudly” expect a service that is free at the point of use, but also said people expect the health service to deliver for them.

“They expect to be able to see their GP in the way that they choose, and to have a relationship with that service that goes beyond picking up the pieces when things go wrong,” Javid added.

He said when he moved to the health portfolio: “There was no doubt about the biggest item that was spilling out of my in-tray.

“An NHS waiting list that will get worse before it gets better, that was projected to grow as high as 13 million. No government, no health secretary, no society, can accept that.

“That’s why we have prioritised elective recovery, check-ups, scans, surgeries, with the biggest catch-up fund in the history of the NHS. And we are already delivering.”

Looking ahead, the health secretary said 2022 would be a “year of renewal and reform” for the NHS.

He said: “In the past, some governments chose cash, others chose reform. That’s a false choice. You can’t have one without the other.

“So yes, we will continue to prioritise funding for the NHS in the wake of this global pandemic. But I also promise you this: 2022 will be a year of renewal and reform.”

He said the NHS needs a “truly modern digitised system”, which he described as the “only way” to drive down the backlog and build a sustainable service for the future.

For Labour, shadow health secretary Jon Ashworth said: “This was an empty speech that will hugely disappoint the many thousands of patients who are anxious and scared, those waiting longer for cancer treatment or surgery, those waiting for a doctor’s appointment and those increasingly forced to pay for surgery.

“Tory MPs have imposed a punishing, unfair tax rise on working people yet ministers have no plan to rebuild and reform health care to bring waiting times down and deliver the quality care people deserve.”

Related: Raab claims misogyny can be abuse by ‘a woman against a man’