"Gary Neville subbed on for Marcus Rashford today as leader of the opposition," said one Twitter user. 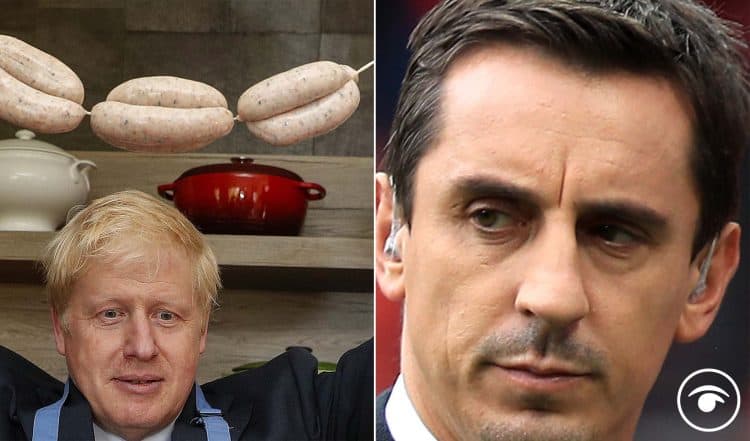 One child every second will be affected by the widely opposed cut to Universal Credit (UC) on average over the next month, a charity has warned.

Save the Children is one of a long line of charities, think tanks, unions and leaders from across the political spectrum hitting out against the removal of the £20-a-week uplift.

The Government has been pressing ahead with the cut despite concerns that hundreds of thousands of people will be plunged into poverty.

From Wednesday, no assessments will include the uplift, meaning that from October 13 – a week later – no payments will be received that include the extra money.

The cut will be staggered over 31 days as families receive payments on different dates, Save the Children said.

Just over 3.5 million children in the UK are living in households that receive UC payments, according to Government figures.

This equates to 1.3 children being hit by the cut every second on average over the 31-day period from October 13, Save the Children said.

As the cliff-edge quickly approaches those on Universal Credit, Gary Neville appeared on GMB to discuss the cut, he was joined by for Tory MP Edwina Currie.

He was fuming at the decision and at Edwina’s comments.

He said: “Well, let me just translate what Edwina said for people up and down the country because it’s a message Conservative MPs have been entrenching in our minds for a long time.

“The first thing that Edwina said was “I’m okay here, we’re okay here”, which is the first thing a Conservative person and MP does, they look after themselves.

“The next thing she said was, “Go and get a job, get back to work you lazy sods. Get off your backsides, stop watching Good Morning Britain and other television programmes and go and get a job.”

“It’s the way in which this sort of language appears from ministers for so long. You know: “Immigrants are all taking our jobs, homeless people are all beggars on the streets.” They’re basically alienating the people.’

‘They’re not there sitting and thinking “I’m going to take the Chancellor’s money and live off nothing and live off their money for the next 10 or 15 years and do nothing.”’

Gary then put the Government to the sword and said: ‘To me the language is always divisive, it’s not helpful. It’s really dangerous, we’re one team in this country, we’re one group of people.

‘Honestly, to remove Universal Credit payments at this moment in time is brutal. Let’s be clear, it is brutal.’

Related: Watch: ‘Priti Patel is truly terrifying’ as she vows to turn back boats