Both leadership candidates have today been forced to confront a stark report from economists warning of the danger tax cuts could pose to the public purse. 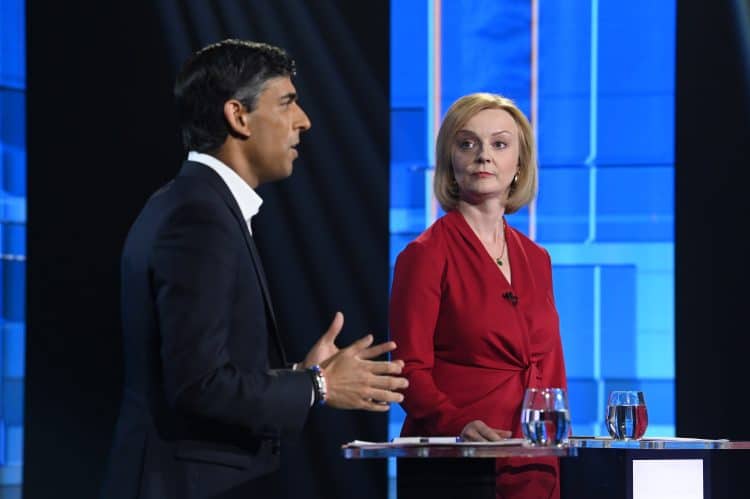 Liz Truss is all but certain to be the next prime minister of the United Kingdom based on the latest polling figures.

The former foreign secretary has taken 68 per cent of the vote among those who have already voted (57 pe cent).

Among those yet to vote, 44 per cent say they will back Truss while just 26 per cent remain undecided.

The results have been announced after both leadership candidates were forced to confront a stark report from economists warning of the danger tax cuts could pose to the public purse.

Frontrunner Truss and rival Rishi Sunak, who have repeatedly clashed over tax cuts and competing visions for the UK economy, were faced with a sobering analysis by the respected Institute for Fiscal Studies (IFS), which warned that “permanent tax cuts” could exacerbate pressures on public spending.

The warning comes amid a worsening economic outlook for the UK, with inflation rising to 10.1% in July, and as passengers across the country prepare to grapple with the latest wave of rail, tube and bus industrial action over the coming days.

Mr Sunak, who is believed to be trailing his rival in support among the party members set to choose the next Tory leader, used the IFS study to attack Ms Truss and her economic plans.

A Sunak campaign spokesman said the analysis “drives a coach and horses through Liz’s economic plan”.

“Rishi has consistently made the case that permanent, unfunded tax cuts would cause significant damage to the public finances and push inflation up higher,” the spokesman said.

High inflation and interest rates will push up public spending, including on benefits and pensions, the IFS predicts.

Combined with weak economic growth, this is likely to offset the effect of any expected increased tax intake.

The report warns: “A prudent prime minister and chancellor determined to deliver on the government’s existing fiscal targets and to manage the nation’s finances responsibly would be wise not to bank on higher revenues matching higher spending.”

Both candidates, during the latest campaign hustings in Belfast, doubled down on their economic policies as Mr Sunak said the Foreign Secretary would be guilty of “moral failure” if she does not focus on the nation’s poorest as he warned her policies could further stoke inflation.

Ms Truss instead insisted “taxes are too high and they are potentially choking off growth”.

Team Truss appeared unfazed by the IFS analysis, with a campaign source stressing that Ms Truss “would use an emergency budget to kickstart her plan to get our economy growing and put more money into the pockets of hardworking people”.

“Liz will cut taxes using the existing fiscal headroom and will get debt to GDP falling within three years. You cannot tax your way to growth, and business as usual will not do.”

But IFS director Paul Johnson said: “Now is not time for big tax cuts, which could themselves make inflation worse.”