The daily appearances largely ended in April after the president suggested that injecting toxic disinfectant could help treat the coronavirus. 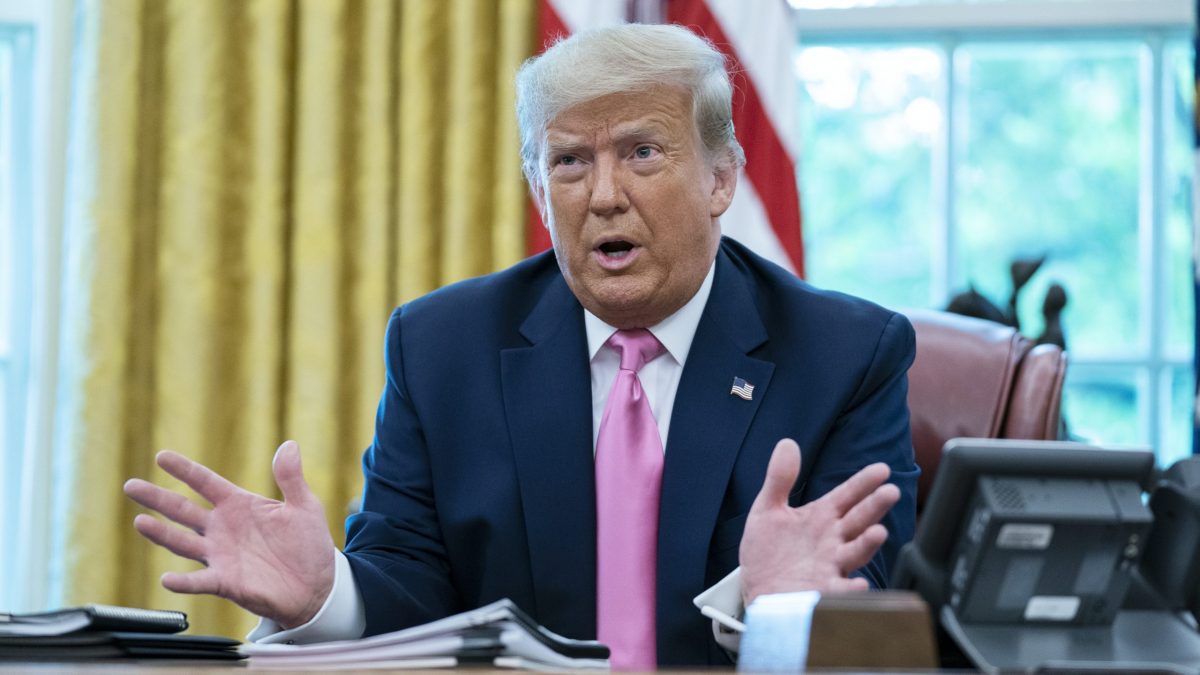 Donald Trump is set to again take centre stage in the US government’s coronavirus response after a White House debate over how to deploy its biggest yet most volatile asset played out in public as his poll numbers faltered.

One week after a campaign shake-up, the plan is for Mr Trump to again become a regular public presence at the podium starting on Tuesday as confirmed coronavirus cases spike nationwide.

Trump advisers have stressed the urgency of the president adopting a more disciplined public agenda in an effort to turn around his lagging poll numbers against Democratic rival Joe Biden.

“I think it’s a great way to get information out to the public,” Mr Trump told reporters in the Oval Office on Monday, saying he hoped to discuss progress on vaccines and therapeutics.

His once-daily turns behind the White House briefing room podium largely ended in late April after the president’s off-the-cuff suggestion that injecting toxic disinfectant could help treat the coronavirus.

In another sign of recalibration, Mr Trump belatedly tweeted a photo of himself in a face mask on Monday, calling it an act of patriotism.

It came after months of resistance to being publicly seen in the coverings — deemed vital to slowing the spread of the virus — but seen by the president as a sign of weakness.

White House aides said the format, venue and frequency of Mr Trump’s forthcoming appearances have not been finalised. And it was not clear whether he would field questions or share the stage with others, including vice president Mike Pence and doctors Deborah Birx and Anthony Fauci.

We are United in our effort to defeat the Invisible China Virus, and many people say that it is Patriotic to wear a face mask when you can’t socially distance. There is nobody more Patriotic than me, your favorite President! pic.twitter.com/iQOd1whktN

But it all pointed to an apparent course-reversal. Mr Trump for months had heeded aides who pushed for him to all but ignore the virus and instead focus on the economy and more politically advantageous terrain.

He will now use the briefings “to speak directly to the American people about the federal government’s coronavirus response and other pertinent issues”, said White House deputy press secretary Sarah Matthews.

The return to briefings has been championed in the West Wing by senior adviser Kellyanne Conway, who advocated publicly that Mr Trump should return to the podium to more clearly highlight steps toward economic recovery and display leadership over Covid-19.

“His approval rating on the pandemic was higher when he was at the podium,” Ms Conway said on Friday, in a tacit admission of what is largely unspoken aloud by Trump aides – that he is behind in both public and private surveys.

“It was at 51 per cent in March. And I think people want to hear from the president of the United States.

In addition to discussing medical developments, Mr Trump is also expected to focus on his advocacy for schools to reopen for in-person education, following his threat to try to withhold federal funds from those that stuck to remote education.

Other Trump aides have for months pushed the president to keep a lower profile on the virus response and instead champion the economic recovery and other issues with a clearer political upside.

That camp, led by chief of staff Mark Meadows, has attempted to plot out something close to a traditional messaging strategy for Mr Trump to contrast him with Mr Biden on policy issues.

In the last week, they have organised White House events highlighting Mr Trump’s efforts to support law enforcement, talk tough on China and roll back regulations, all while sharply criticising Mr Biden. Mr Trump himself has flagged forthcoming moves on immigration and health care.

Mr Meadows was among the most forceful White House aides in pushing Mr Trump to end the once-daily coronavirus briefings more than two months ago after the president mused about injecting disinfectant as a cure for the virus. It sparked state medical warnings against the potentially deadly move.

The daily briefings were scrapped soon afterwards, fulfilling the hope of aides who saw them dragging down the president’s poll numbers, particularly with older voters.

But the president himself had not abandoned the idea of reviving them in some form, telling aides he missed the early evening window in which he would dominate cable television ratings. Tellingly, when he announced Monday that the news conferences could return, he did so with an eye toward its time slot.

The view in Trump’s circle is that the president needs an alternate means to reach voters with his trademark rallies largely on hold because of the coronavirus.

The president voiced frustration in recent days about his inability to hold a rally, blaming Democratic governors in battleground states for not waiving Covid-19 restrictions on large gatherings.