The Royal Navy's base on the west coast of Scotland is home to the nuclear submarines - but a Yes vote could change that. 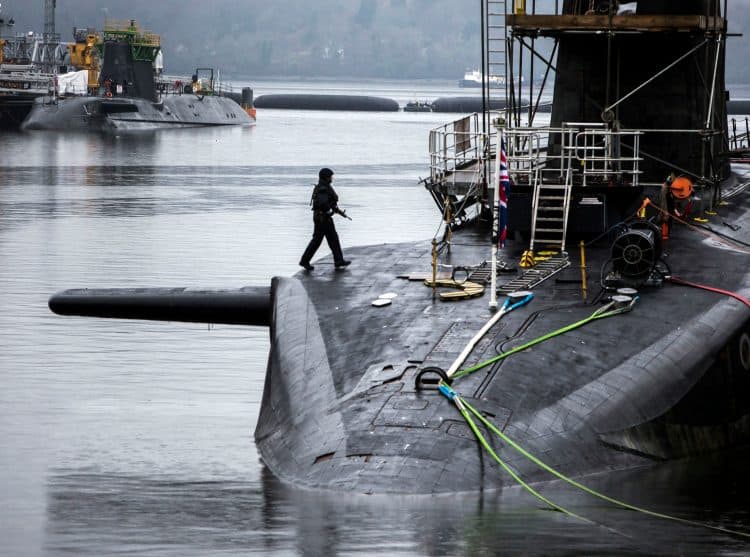 The UK’s nuclear submarines could be moved abroad if Scotland becomes independent, according to secret government contingency plans.

The Royal Navy’s base at Faslane on the west coast of Scotland is home to the UK’s nuclear deterrent, but “senior officials” told the Financial Times they could be moved to naval bases in the US or France if Scotland votes Yes in a second referendum on independence.

The newspaper also reports that the Ministry of Defence (MoD) could keep them within an independent Scotland by creating a new British Overseas Territory.

However, a spokesman for the MoD denied there are any plans to move the submarines. The Scottish government said it is committed to the “safe and complete withdrawal of Trident from Scotland”.

US and France considered

An MoD spokesman said: “The UK is strongly committed to maintaining its credible and independent nuclear deterrent at HM Naval Base Clyde, which exists to deter the most extreme threats to the UK and our Nato allies.

“There are no plans to move the nuclear deterrent from HM Naval Base Clyde (Faslane), which contributes to Scotland’s and the wider UK’s security and economy, and its supporting facilities are safe for local communities.”

The Financial Times cited “several senior officials” who have been briefed on plans for what would happen to the nuclear deterrent if Scotland becomes independent.

According to the newspaper, the preferred option would be to move the nuclear deterrent to the Royal Navy base at Devonport in Plymouth.

Allied naval bases in the US and France are also reportedly being considered for the fleet.

Another option said to be under consideration is to negotiate a new British Overseas Territory described as a “Nuclear Gibraltar” within Scotland, with the UK government leasing Faslane and nearby Coulport from the independent Scottish government.

Nicola Sturgeon’s SNP Scottish government was re-elected in May, with the First Minister promising a second referendum on independence.

The SNP agreed a powersharing deal with the Scottish Green Party in August, which has put the Greens into government for the first time in the UK.

As a result of the deal, Sturgeon has insisted she has an “undeniable” mandate for IndyRef2, as the two parties together hold 72 of the 129 seats in the Scottish Parliament.

The SNP has long opposed the UK’s nuclear deterrent, and has previously called for Trident missiles not to be renewed.

Related: Food and drink industry £2 billion worse off since Brexit