Gareth Southgate has said England are "more determined than ever" to continue taking the knee throughout the tournament. 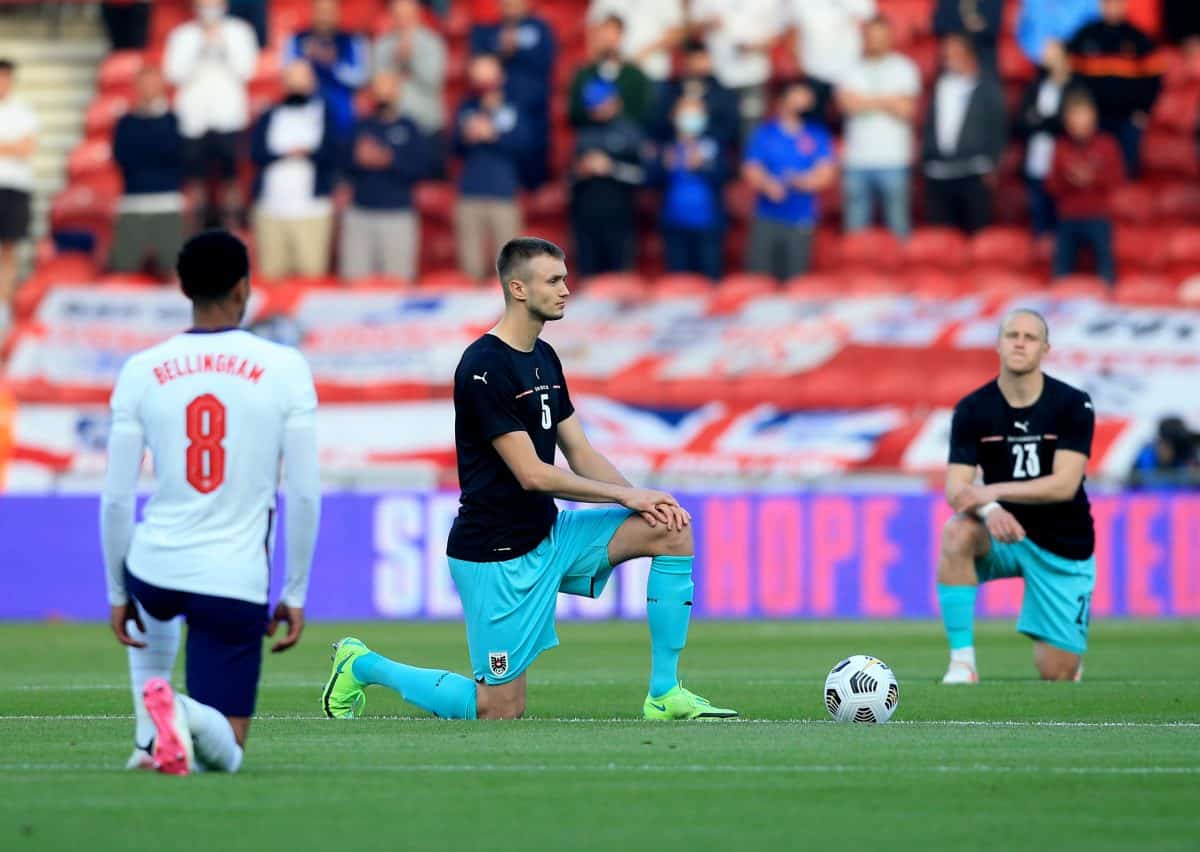 Austria's Sasa Kalajdzic takes the knee ahead of the International Friendly at The Riverside Stadium, Middlesbrough. Picture date: Wednesday June 2, 2021.

A Tory MP has claimed he will boycott England’s games in the European Championship over players’ decision to take the knee before the matches.

Lee Anderson, the MP for Ashfield in Nottinghamshire, lashed out at the England team for supporting a “political movement” – and suggested they risked alienating “traditional supporters”.

“For the first time in my life I will not be watching my beloved England team whilst they are supporting a political movement whose core principles aim to undermine our very way of life,” he said in a Facebook post.

His intervention comes after players were booed fro taking the knee before their match against Austria on Wednesday. Gareth Southgate, the England manager, has said the team would continue making the gesture throughout the tournament – and were “more determined than ever”.

“We are very disappointed that it happened. We’re all trying to move towards equality and support our own teammates because of some of the experiences they’ve been through in their lives, but people decided to boo,” he said on Saturday.

“We’re totally committed to supporting each other, supporting the team, and we feel more than ever that we are determined to take the knee throughout this tournament.”

But Anderson said the FA and England team had made a “big mistake” and “now run the risk of becoming like the Labour Party and that is having nothing in common with their traditional supporters”.

He added: “All forms of racism are vile and should be stamped out – but this is not the way.”

Boos were heard among the crowd at Middlesbrough’s Riverside Stadium before the kick-off of England’s pre-tournament friendly with Austria, but they were soon drowned out by cheers.

Speaking ahead of the side’s game against Romania on Sunday evening, ex-England captain Gary Lineker said: “If you boo England players for taking the knee, you’re part of the reason why players are taking the knee.”

Earlier this week, Southgate said:  “It’s not something on behalf of our black players I wanted to hear because it feels as though it’s a criticism of them.

“I think we have got a situation where some people seem to think it’s a political stand that they don’t agree with. That’s not the reason the players are doing it. We’re supporting each other. I was pleased that was drowned out by the majority of the crowd.

“We can’t deny the fact that it happened. I think the most important thing for our players to know is all their teammates and all the staff are very supportive.

“I think the majority of people understand it. I think some people aren’t quite understanding the message. I suppose we’re seeing that across a number of football grounds at the moment.”