Owen Paterson could face a by-election after the Commons Standards Committee published its findings. 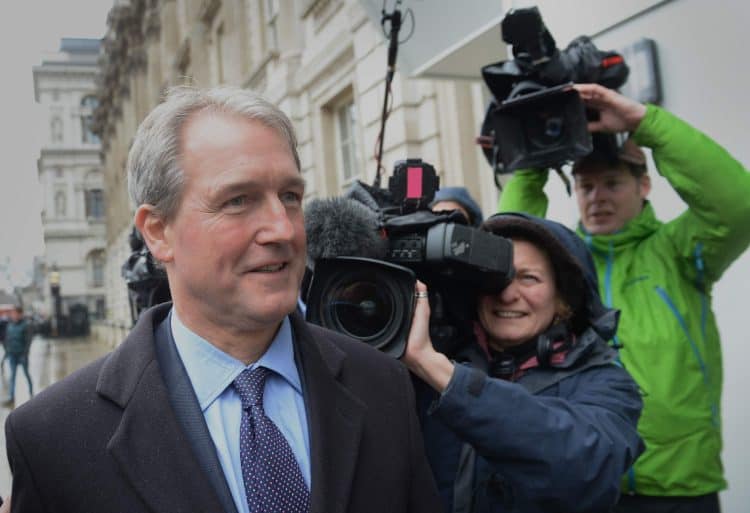 Tory MP Owen Paterson faces a 30-day suspension from the House of Commons for an “egregious” breach of lobbying rules – raising the possibility that his constituents could trigger a by-election.

The MP for North Shropshire, a former cabinet minister, was found by the Commons commissioner for standards – Kathryn Stone – to have breached advocacy rules. It was discovered he had worked as a consultant to Randox, a clinical diagnostics company, since August 2015.

He also worked as a paid consultant to Lynn’s Country Foods – a processor and distributor of meat products – since December 2016.

The Commons Standards Committee said his actions were an “egregious” breach of the rules on paid advocacy by MPs and recommended that he should be suspended for 30 sitting days.

But, in an angry statement, Paterson rejected the commissioner’s findings, accusing her of making up her mind before she had even spoken to him.

“This is a biased process and not fair,” he said. “It offends against the basic standard of procedural fairness that no-one should be found guilty until they have had a chance to be heard and to present their evidence including their witnesses.”

Paterson said the manner in which the investigation was carried out had “undoubtedly” played a “major role” in the decision of his wife Rose to take her own life last year.

In her report, Stone found that between November 2016 and November 2017 Paterson made three approaches to the Food Standards Agency (FSA) relating to Randox – a clinical diagnostics company – and antibiotics in milk in breach of the ban on paid advocacy.

He was also found to have made four approaches to ministers at the Department for International Development relating to the company and blood testing technology between October 2016 and January 2017.

And Paterson was found to have made seven approaches to the FSA between November 2017 and July 2018 relating to Lynn’s Country Foods.

The commissioner further found that he failed to declare his interest as a paid consultant to Lynn’s Country Foods in four emails to FSA officials and that he used his parliamentary office for business meetings with his clients on 16 occasions between October 2016 and February 2020.

He also sent two letters relating to his business interests, on House of Commons headed notepaper – the only breach of the rules which he accepted.

In its report, the committee recommended that a motion to suspend Paterson should be tabled for MPs to debate and vote on within five sitting days.

“The committee found that Paterson’s actions were an egregious case of paid advocacy, that he repeatedly used his privileged position to benefit two companies for whom he was a paid consultant, and that this has brought the House into disrepute,” it said.

However, in a defiant statement the MP said the process to which he had been subjected did not comply with natural justice.

He said he had been pronounced guilty without being spoken to by the commissioner and that 17 witnesses who came forward to support him were ignored.

Paterson said the investigation had left his wife feeling “beleaguered”, fearing that his reputation would be destroyed and that he would be forced to resign as MP for North Shropshire.

“We will never know definitively what drove her to suicide, but the manner in which this investigation was conducted undoubtedly played a major role,” he said.

“Rose would ask me despairingly every weekend about the progress of the inquiry, convinced that the investigation would go to any lengths to somehow find me in the wrong.

“The longer the investigation went on and the more the questions went further and further from the original accusations, the more her anxiety increased.”

Paterson said the inquiry had not created a “fair and just outcome” and called on MPs to waive Parliamentary privilege so he can challenge it in the courts.

If, however, the Commons backs the committee’s recommendations, it could lead to recall proceedings, resulting in a by-election if 10 per cent of his constituents sign a petition demanding one.

In his evidence to the commissioner, Paterson said he had been trying to raise concerns about the contamination of milk and ham with banned carcinogenic substances.

He argued that the rules allow an MP to raise a “serious wrong or a substantial injustice” even if their external associates benefit incidentally.

However this was rejected by the committee, which said: “What might have been permissible in a single exceptional case became Paterson’s standard practice.

“It stretches credulity to suggest that 14 approaches to ministers and public officials were all attempts to avert a serious wrong rather than to favour Randox and Lynn’s, however much Paterson may have persuaded himself he is in the right.”