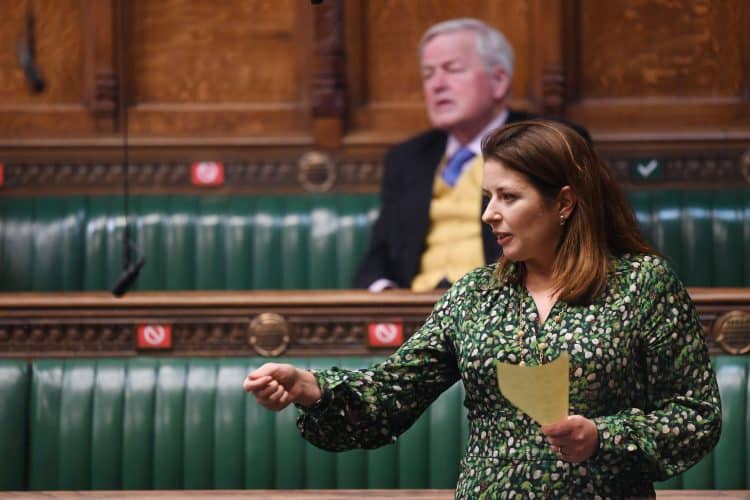 Labour is demanding an apology from a Tory MP said that chief medical officer Chris Whitty should “defer” to Boris Johnson on Covid over the Christmas period.

Joy Morrissey, a parliamentary aide in the Ministry of Justice, hit out at Professor Whitty after he urged people to “reprioritise” unnecessary social gatherings as Omicron surges, despite the prime minister insisting he is not ordering the cancellation of Christmas get-togethers.

In a hastily-deleted tweet, the Beaconsfield MP suggested the chief medical officer was seeking to turn the UK into a “public health socialist state”.

“Perhaps the unelected covid public health spokesperson should defer to what our ELECTED Members of Parliament and the Prime Minister have decided,” she wrote.

“I know it’s difficult to remember but that’s how democracy works. This is not a public health socialist state.”

“It is outrageous to see a government PPS attacking the chief medical officer in this way,” he said.

“She should apologise and withdraw this immediately.

“Chris Whitty has never disputed where policy is made – he makes this point repeatedly. Listen, don’t silence.

“The chief medical officer and every health and care worker in the country deserves our full support. Their only motivation is helping us.”

“@UKCivilService supports the government, works flat out & needs to be encouraged & defended in its role of offering impartial and confident advice.”

Speaking at a Downing Street press conference on Wednesday, Professor Whitty said he expected people to “deprioritise” social gatherings to ensure they were able to spend Christmas with their families.

“Because otherwise the risk of someone getting infected at something that doesn’t really matter to them and then not being able to do the things that do matter to them obviously goes up.”

The NHS medical director of primary care, Dr Nikki Kanani, added: “My advice would be if you’re going to go to a stadium at the weekend, make it one where you can get your vaccine or help out to give a vaccine rather than going to watch a match.”