It comes after Mark Drakeford described flag displays as ‘vacuous symbolism by tea-towel [waving] Tories of 2021’. 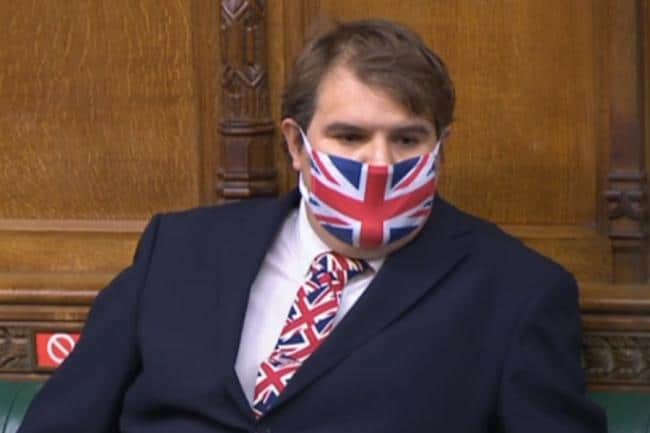 A Conservative MP showed up to the House of Commons today wearing a Union flag tie and mask – before ranting about the lack of Union flags in the Welsh Parliament.

During questions to the culture secretary in the Commons, Dr Jamie Wallis expressed his discontent after members of the Senedd were told to stop displaying flags of any kind when joining parliamentary debates on video call.

Union flags had been displayed by Conservative members including Janet Finch-Saunders and Laura Anne Jones.

This week also saw the publication of Mark Drakeford’s report on the “fragile” Union, in which he criticised the Tories for thinking flag-waving can stop Scottish and Welsh independence.

“I want to draw my right honourable friend’s attention to the issue of displaying the Union flag in the Welsh parliament,” Dr Wallis told Oliver Dowden.

“As many will know, the presiding officer of the Senedd banned the displaying of the Union flag by Conservative members last week, and yesterday the first minister Mark Drakeford described them as ‘vacuous symbolism by tea-towel [waving] Tories of 2021’.

“Does my right honourable friend agree with me that people across Wales are proud to display the Union Jack because their pride in their country they live in and of what the UK stands for. What actions will –“

Pride in the Union flag

At this point Dr Wallis was cut off by Speaker Lindsay Hoyle, who asked for a response from Dowden.

The Culture Secretary got to his feet and responded: “Well of course I share my honourable friend’s pride in the Union flag. Of course it unites us as a nation, and a people, and as he well knows the Union flag is the national flag of the United Kingdom and it is so called because it embodies the emblems of four or three countries united under one sovereign.

“The kingdoms of England, Wales, of Scotland and of course of Northern Ireland. I do think it’s quite extraordinary that the first minister should describe it as vacuous symbolism by tea towel Tories, it really does show how out of touch he is with the people of Wales and the Labour Party is with the wider United Kingdom.”

Meanwhile, pictures of an eight-story Union flag in Cardiff draped on a HMRC office block were making the rounds on social media earlier today.