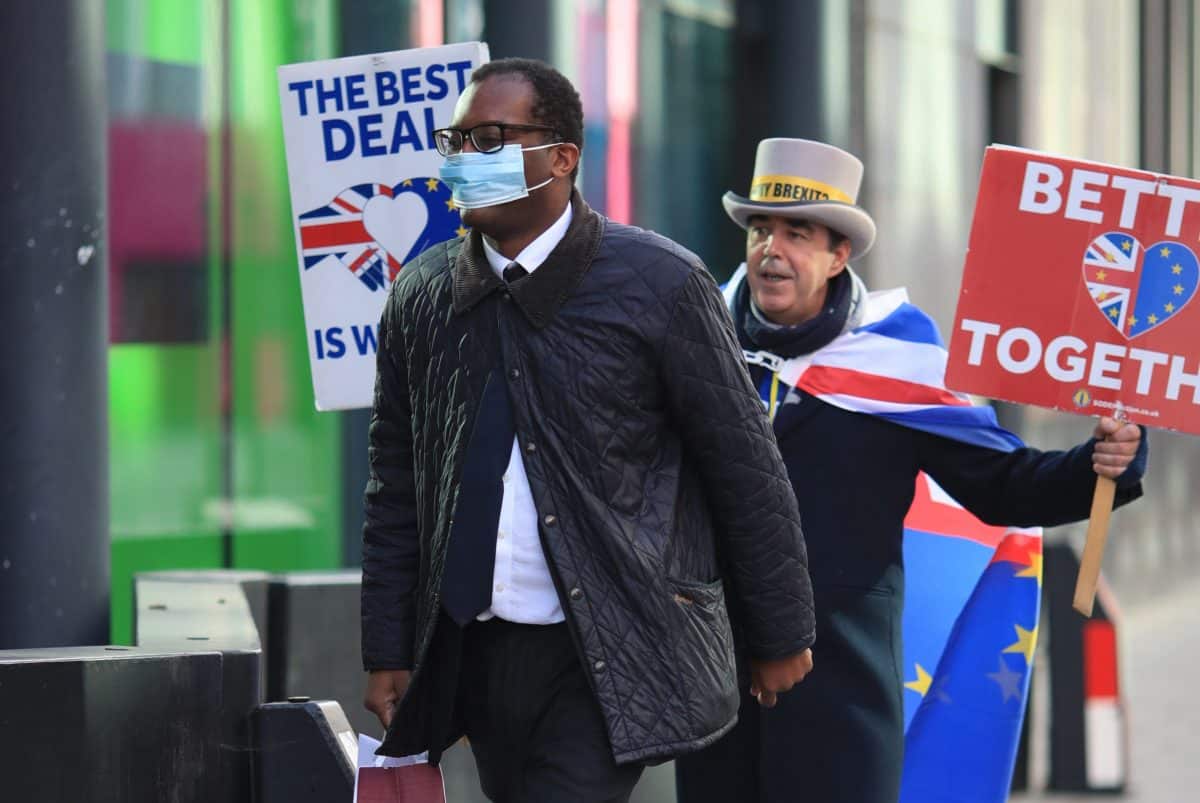 The business secretary said it would not be productive to “pull up the drawbridge” with countries with questionable human rights records as the Government holds the door open to increasing trade with China.

Kwasi Kwarteng backed Dominic Raab, after leaked reports suggested the foreign secretary told officials the UK should strike trade deals with nations that do not meet the level of standards set out in the European Convention on Human Rights (ECHR).

In a leaked video call, obtained by HuffPost UK, he told staff that trading only with countries that meet European Convention on Human Rights (ECHR) standards would mean missing out on trade with “growth markets”.

Speaking during a question and answer session with Foreign, Commonwealth and Development Office staff, Raab said: “I squarely believe we ought to be trading liberally around the world.

The foreign secretary is also reported to have said: “We don’t junk whole relationships because we’ve got issues – we have a conversation because we want to change the behaviour.

“And I think we’re in a much better position to do that if we’re willing to engage. I can think of behaviour that would cross the line and render a country beyond the pale.

“But fundamentally I’m a big believer in engaging to try and exert positive influence even if it’s only a moderating influence, and I hope that calibrated approach gives you a sense that it’s not just words – we back it up with action.”

Labour said the prospect of offering preferential trade terms to China, which is accused of carrying out genocide against the Uighur minorities in Xinjiang province, was an “abomination”.

But Kwarteng said the UK would continue to make “representations” to countries, including China, about upholding human rights but that the Government needed to be “flexible” with its trade policy.

Niall Paterson – Should the UK be trading with countries who are in breach of generally accepted standards of human rights?

Kwasi Kwarteng – Dominic Raab was right, we should be trading with countries like that… we simply can't write whole countries off… pic.twitter.com/fwLl28BeOK

The comments come after ministers on Tuesday published a major review of post-Brexit foreign policy, which includes plans for a “positive trade and investment relationship” with China.

The business secretary told Sky News: “I agree with what the foreign secretary has said about trade.

“I think you obviously have to take each circumstance as it comes. I think there are serious issues with China and we have made representations to them.

“Our ambassador in China has made really strong representations to the Chinese government about their behaviour and we’ve said that we don’t find this (Uighur treatment) remotely acceptable.”

In an interview with BBC Radio 4’s Today, Kwarteng added that other nations were likely to take diplomatic interventions “far more seriously” if objections were made when “already engaged”.

“What I don’t think is productive and what doesn’t make any sense is to simply metaphorically pull up the drawbridge and say we aren’t going to have any dealings with whatever country it is and then at the same time tell the country when we think they are not behaving properly or treating their minorities well,” he added.

“I think you have to engage in order to be taken seriously and in order to have influence, and that’s what we are trying to do.”

But Labour’s Emily Thornberry called for the UK to continue to insert human rights clauses into future trade deals, just as it had done as an EU member, to “exert some pressure” on countries to follow high standards.

“I think it would be an abomination to sign up to a trade deal, giving China preferential rates and access to our economy at the moment, I really do,” the shadow trade secretary told Today.

Thanks for Brex-sh*t! Nigel Farage ‘on sewage-covered beach’ is a must-watch