“There were at least five different people potentially from five different parts of the country who all came together in one household and who were clearly breaking social distancing rules. 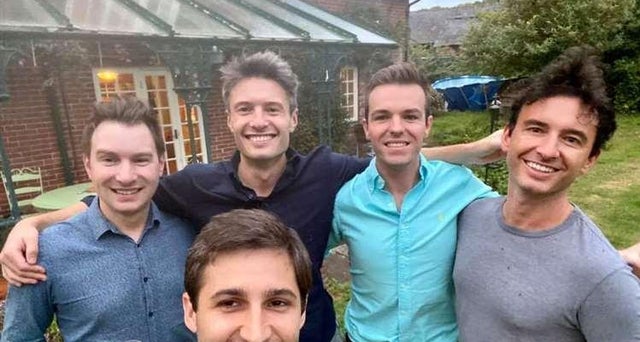 Kelham Cooke, second from right, with friends at Bere Regis in Dorset on July 26, 2020. At the front of the picture is Luke Graystone, chief of staff to Andrea Leadsom MP

A council leader is facing calls to resign after being pictured breaking social distancing rules by posing for selfies with pals during a weekend away to the seaside.

Councillor Kelham Cooke, the leader of South Kesteven District Council, was forced to apologise after he caught flouting coronavirus guidelines on social media.

He can be seen with his arms around four smiling friends, including Northampton councillor Luke Graystone, who is chief of staff to MP Andrea Leadsom.

The images sparked outrage that the local politicians clearly broke social distancing rules – despite calling on residents to obey them to stop the spread of Covid-19.

Cllr Cooke is facing calls to step down from his role by those who argue the images -taken in Dorset just over a week ago – have made his position untenable.

Councillor Charmaine Morgan, leader of the South Kesteven Labour Group, said she believed stepping down was “the right thing to do.”

She said: “It is a critical time, when we are requiring people to wear masks in shops and seeing an increase in Covid-19.

“It is a hidden enemy so it is easy to get complacent and forget about it, but we can’t afford to do that.

“At the very least the incident brings into question Coun Cooke’s judgment.

“There were at least five different people potentially from five different parts of the country who all came together in one household and who were clearly breaking social distancing rules.

“We expect certain standards from everybody at a really critical time, and politicians should be setting an example to everybody else, and I would certainly be judgmental of anybody else who doesn’t follow the rules.

“It’s quite unacceptable for people to think they are above the law that has been laid down and, particularly with what we know about Covid-19, it would potentially be putting people’s lives at risk.”

Independent Kesteven Councillor Jan Hansen added: “Residents of South Kesteven certainly do deserve to be shown a higher standard of leadership from the hierarchy at the district council, which does not appear to have been demonstrated here.

“Sadly, it would seem that Coun Cooke’s position has become untenable as a result of his cavalier actions.

“I would expect that an urgent meeting for elected councillors will be arranged immediately, in order to debate how best to proceed regarding leadership roles.

“I would like to add that if a vote is decided upon regarding Coun Cooke’s future, it is imperative that fellow councillors vote according to their own consciences, and not following the usual undemocratic whipping process normally exercised at council meetings.”

He said: “Social distancing is vitally important for everyone.

“If we think about it, we will all know someone who is particularly vulnerable to Covid-19; it is our responsibility to protect them.”

In a statement, Cllr Cooke apologised for “unintentionally” breaking the guidelines, which urge limiting contact with others outside your household or bubble.

He said: “The Government’s guidelines have been designed to reduce the risk of spreading coronavirus which I fully support, and I recognise the importance of us all adhering to this guidance.

“I have always sought to follow social distancing measures, however, on this occasion I unintentionally transgressed the guidelines.

“I sincerely apologise for this mistake.”

Cllr Cooke also works for the Conservative MP for Grantham and Stamford Gareth Davies, as his constituency support officer.

Mr Davies said: “It is important that everybody seeks to adhere to the Government’s guidelines on social distancing in order to tackle the coronavirus.

“I have received a full written and unreserved apology from Kelham Cooke who has acknowledged that he made a mistake in not following the guidance in this instance.

“I have accepted his apology and his assurances that guidelines will be followed in the future.”