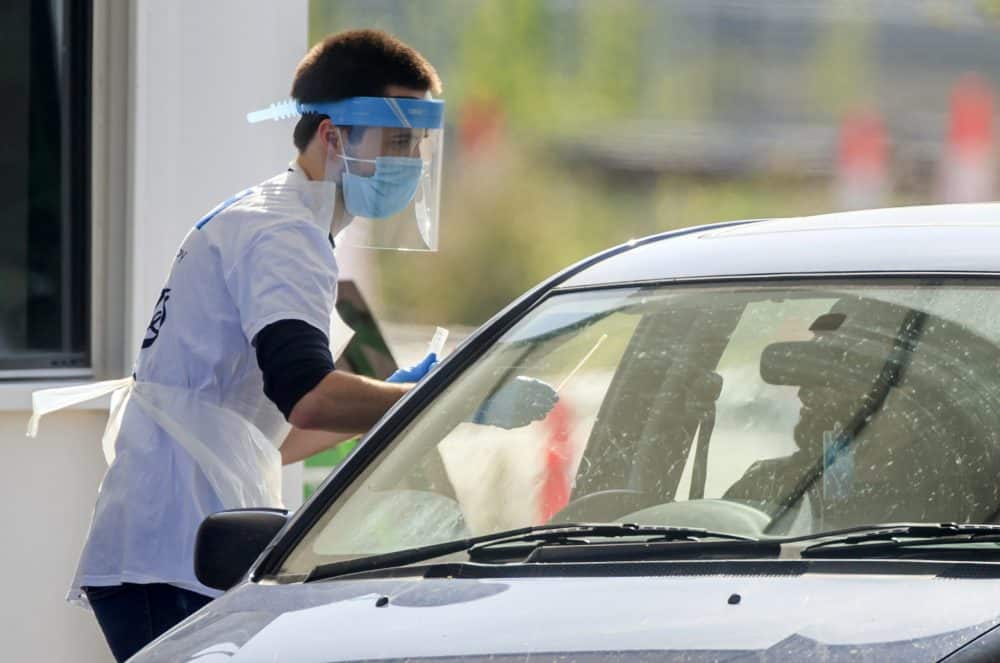 Samples are taken at a coronavirus testing facility in Temple Green Park and Ride, Leeds, as NHS Test and Trace - seen as key to easing the lockdown restrictions - is rolled out across England.

Local health protection teams continue to be more successful than call centre workers at reaching close contacts of people who have tested positive for coronavirus, according to the latest data.

Test and Trace figures from the Department of Health and Social Care (DHSC) show that, for cases handled by local teams, 98.0% of close contacts of people who tested positive for Covid-19 have been reached and asked to self-isolate.

By contrast, for those cases handled either online or by call centres, 56.1% of close contacts have been reached and asked to self-isolate.

NHS Test and Trace has two ways of handling cases depending on their complexity.

Public Health England local health protection teams manage so-called “complex” cases linked to outbreaks, with examples including someone who works or has recently visited a hospital, care home, prison or school for people with special needs.

And for other cases, referred to as so-called “non-complex” cases, these are reached either online or by call centre.

The figures were published amid concerns about the effectiveness of the operation, with experts warning that the NHS Test and Trace system must rapidly improve to cope with the pressures expected once schools fully return in September and as winter approaches.

Boris Johnson repeated his claim that the system was “world-beating”, telling reporters on Thursday: “If you look at what we are doing, actually I think it certainly is – it certainly does fit that description of ‘world-beating’.

“I think I’m right in saying that we are now testing more – per head of population – than virtually any other country in Europe, certainly, in America they are testing a huge number of people.”

He said the test and trace system was “absolutely crucial” for the Government’s coronavirus strategy.

“If you look at what we are doing with some of the local social distancing measures that we are bringing back in, that’s entirely driven by our ability to detect cases through local test and trace, working with our local authorities and taking the right local measures,” he said.

There has been a consistent gap between local teams and call centres/online since the Test and Trace system launched.

In the first week, for cases handled by local teams, 99.7% of close contacts of people who tested positive for the virus were reached and asked to self-isolate, while for cases handled either online or by call centres the figure was 52.5%.

This trend has continued week-on-week, with similar percentages recorded.

Reports have suggested that some contact tracers working for the NHS Test and Trace programme in England are making just a handful of calls a month.

Some councils have taken matters into their own hands and launched local contact-tracing operations to supplement the national system.

Calderdale Council, which covers Halifax and surrounding areas, is the second authority to make the move after Blackburn and Darwen said it was setting up a locally focused system to utilise community knowledge.

But senior officials insist that the Test and Trace programme is not at odds with local systems, and is working in partnership with local authorities and their local health protection teams.

Meanwhile, around three in four people (77.9%) who were tested for Covid-19 in the week ending July 29 at a regional site or mobile testing unit – a so-called “in-person” test – received their result within 24 hours.

Mr Johnson had pledged that, by the end of June, the results of all in-person tests would be back within 24 hours.

He told the House of Commons on June 3 he would get “all tests turned around within 24 hours by the end of June, except for difficulties with postal tests or insuperable problems like that”.

Since the launch of Test and Trace, 199,524 close contacts of people who have tested positive for Covid-19 have been reached through the tracing system and asked to self-isolate.

Labour leader Sir Keir Starmer, during a visit to north Wales, said: “We don’t need a world-beating track and trace system, we need an effective one and we haven’t got it.

“This is vital to everything that happens. If this doesn’t work it’s very difficult to see how we’re going forward.”

Justin Madders, shadow health minister, said he is deeply concerned that “the numbers are heading in the wrong direction again this week”, adding: “We now need a plan of action from ministers that sets out what they are doing to address these huge holes in the contact tracing system.

“If this means supporting local areas to establish their own local contact tracing systems and ending the failed contract with Serco – as Labour has been calling for, for some time – then ministers must get on and implement this without delay

Meanwhile, Preston City Council’s chief executive said the city could be the next area to face Government intervention after a rise in coronavirus rates.

The authority has advised residents in the Lancashire city to avoid having visitors to their homes, although there are no official restrictions such as the laws brought in for other parts of the county, as well as Greater Manchester and parts of West Yorkshire.

In Scotland, bars, cafes and restaurants in Aberdeen were ordered to close over a coronavirus cluster in the area.

A five-mile travel rule has been put in place and residents are being told not to enter each other’s houses.

First Minister Nicola Sturgeon said there were concerns about “a significant outbreak in Aberdeen that may include some community transmission”.