Several members of the party are angry at new measures imposing the use of face coverings in shops. 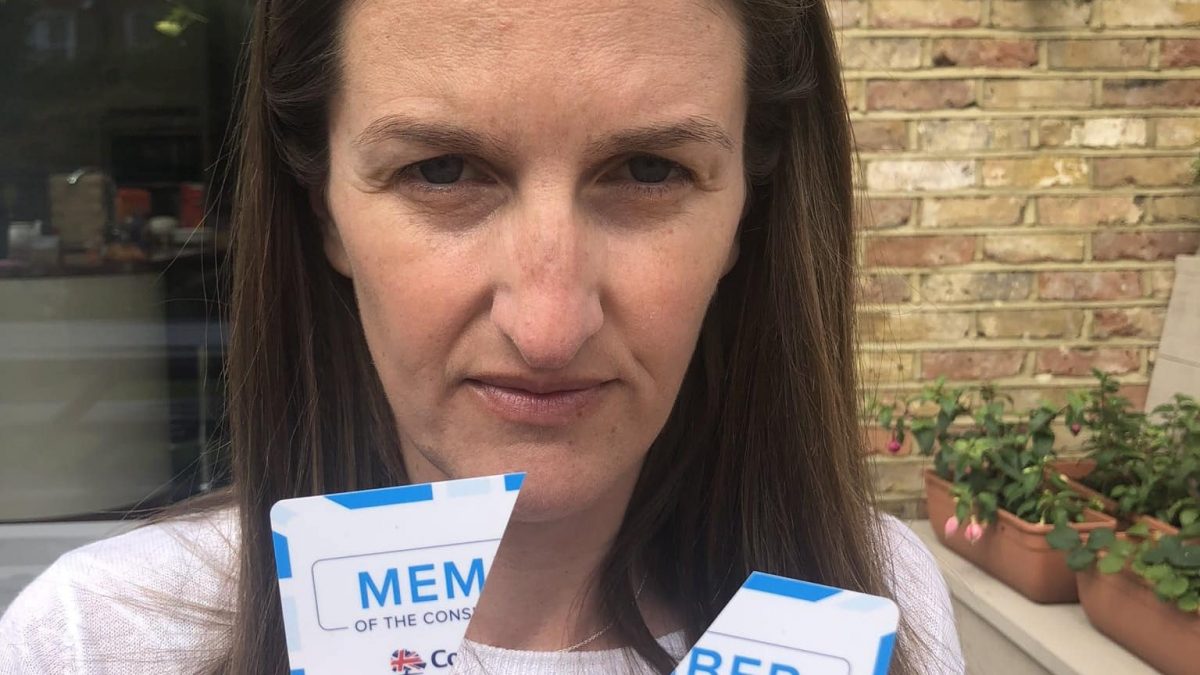 Conservative Party members have been cutting up their membership cards in protest at Boris Johnson’s move to make face masks mandatory in shops in England.

“The wrong way to manage a population”

Dominey Jenner, 42, a stay-at-home mother and former teacher from Wimbledon, south-west London, told the PA news agency that she had been “quite sceptical about the lockdown” but said the face mask rules are the “final straw”.

“If you look at the statistics regarding the cases and the death rate, which is plummeting … why now you would bring in mandatory face masks?

“The other strand for me is the libertarian strand. I think people should be trusted, I think we should be given a choice.

“I’m really angry at how the Government has invoked fear in its population to control people – I think that is the wrong way to manage a population and to govern.”

Mrs Jenner said she and her family have “really suffered over lockdown”, adding that her mother’s breast cancer had not been picked up and has now metastasised, meaning she may now only have a “few years” to live.

She added: “I have an 11-year-old girl. I don’t want to put a face mask on my child. I’m sure that covering your mouth and nose is not a good idea, it’s part of our respiratory system. Instinctively, it can’t be a good thing.”

Ahead of Health Secretary Matt Hancock’s announcement of the new measure, a No 10 spokesman cited “growing evidence that wearing a face covering in an enclosed space helps protect individuals and those around them from coronavirus”.

A recent modelling study from the Universities of Cambridge and Greenwich found that the widespread use of face masks keeps the coronavirus reproduction number below 1.0.

Researchers found that even home-made masks with limited effectiveness can dramatically reduce transmission rates if worn by enough people, regardless of whether they show symptoms.

However, Alistair Haimes, a data analyst and owner of a private investment company, said he has not seen any evidence which convinced him that face masks would have a meaningful impact on transmission of the virus.

“All it is, it’s very transparently that they think that people will be more confident to go back to shops and offices if they wear them than if they don’t.

“I think people should be free to wear them. I just object to being told what to do.”

Mr Haimes said he is leaving the Conservatives just a few months after joining, having previously voted for a number of political parties.

“People are trying to see the dividing lines where they aren’t. People are seeing it as Brexiteer Tories who are against masks.

“I voted for Tony Blair. I voted Remain. I’m not representative of my tribe, as it were,” he told PA.

Both Mr Haimes and Mrs Jenner were critical of the Government’s handling of the coronavirus outbreak.

“To be honest, the camel’s back was breaking anyway. I’m in slight despair that I just don’t think it can be managed at any point worse than they have done,” Mr Haimes said.

“(Mr Johnson) has made some big mistakes,” Mrs Jenner said. “He’s not communicated a vision. It went from squashing the sombrero and saving the NHS, to the R number, which seems to have disappeared from everyone’s vocabulary.

She added that the Government’s move has left her politically homeless.

“This is the dilemma, I really have no idea now. I really hope that some people create a new party. I’ve got my eyes on Nigel Farage and his Reform Party, possibly, but I haven’t done much research on what they stand for.

“I probably brought down the average mean age of the Conservative Party massively and I’m also female, so I think I was a bit of an asset to them in some ways and they’ve totally lost me.”