“The more the government trumpets Saddam’s atrocities, the more the question comes up: Why did you go on doing business with him for so long?” 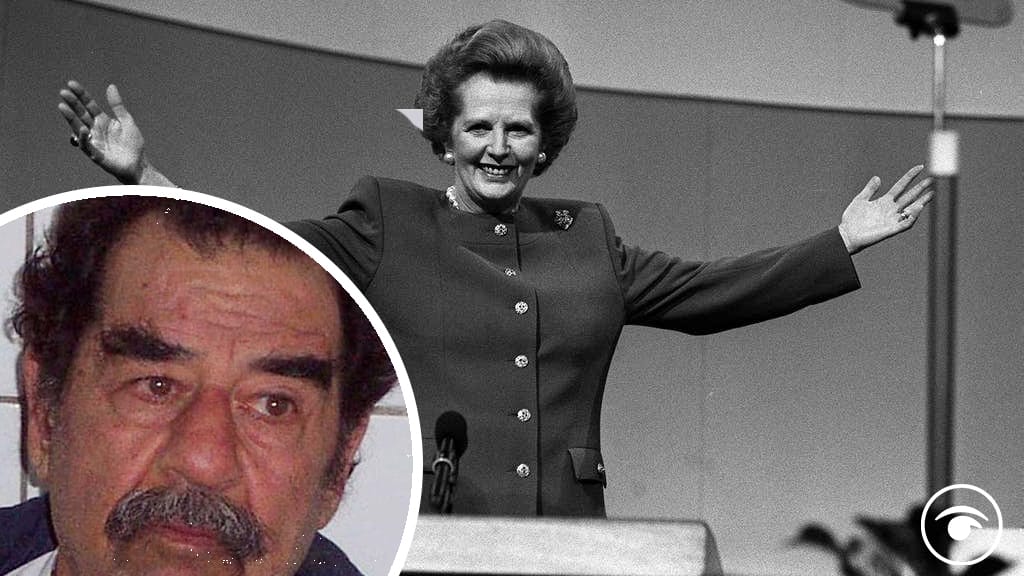 Margaret Thatcher was urged by a government colleague not to embark on a smear campaign against Saddam Hussein at the start of the Gulf War amid concerns over Britain’s arms dealings with the Iraqi regime, previously classified papers reveal.

Foreign Office minister William Waldegrave said “propaganda” against Saddam, requested by the then prime minister, was “not difficult to come by”, but he warned such a tactic would be likely to call into question why British companies had sold munitions to Iraq, despite the atrocities committed during Saddam’s reign.

The warning came less than a fortnight into the Gulf War in August 1990, when Iraqi forces invaded neighbouring Kuwait, embarking on a seven-month occupation of the Arab country over an oil dispute, which was eventually settled when Allied troops forced an Iraqi retreat following Operation Desert Storm in February 1991.

“Why did you go on doing business with him?”

In his letter, held at the National Archives in Kew, Mr Waldegrave said there was “some problem” with Mrs Thatcher’s planned PR drive against Saddam.

He wrote: “The more the government trumpets Saddam’s atrocities, the more the question comes up: Why did you go on doing business with him for so long?”

Mr Waldegrave also expressed concern that the tactic might put at risk the lives of Britons captured by Iraqi forces.

He wrote: “My own view is that there is really no need for the government to feed the flames of anti-Saddam feeling because they are blazing merrily away in any case.

“I do not think that propaganda in this country is really the issue: it is winning the battle in the Arab states, which is important and that is a much more complex issue.

“They do not doubt Saddam’s ruthlessness; that is probably partly why the radicals respect him.”

Mr Waldegrave nevertheless set out a precis of the brutality perpetuated by Saddam dating back three decades, including torture used by his regime on children, the death toll from the eight-year Iran-Iraq War in which Iraq made extensive use of chemical weaponry, and the alleged murder of a shepherd when he was a teenager.

The minister wrote: “The (Iraqi) government, with Saddam Hussein at its head, consists of ruthless men who do not hesitate to use violence to suppress any suspicion of opposition.

“The government has subjected its citizens to forced relocation and deportations, arbitrary arrest and detention, torture, disappearance and summary and political executions almost as a matter of course.”

Mr Waldegrave was later criticised in an inquiry into the arms-for-Iraq saga.

His involvement stemmed back to the decision at the end of 1988 to relax guidelines on defence sales to Iran and Iraq following the ceasefire in the war between them.

Mr Waldegrave, together with then trade and defence ministers Alan Clark and Lord Trefgarne, agreed a new wording for the guideline covering the export of non-lethal defence equipment such as machine tools.

However, after a public outcry over the gassing of Iraqi Kurds by Saddam’s regime, they agreed the change should not be announced publicly.

The ministers continued to insist the policy remained unchanged and the guidelines were being applied even-handedly to Iran and Iraq.

Mr Waldegrave signed 27 letters stating the policy had not changed – something the inquiry found was “not accurate”.