The chancellor borrowed a Sainsbury's staffer's car for his staged fuel duty photoshoot. 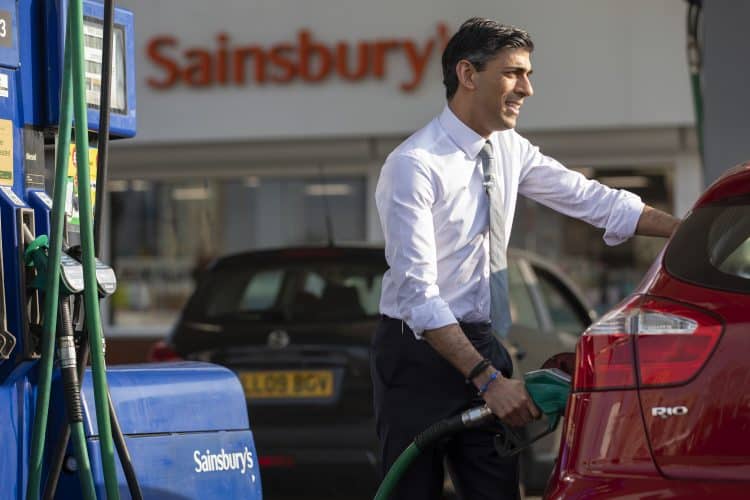 The car which Rishi Sunak was pictured filling with petrol to tout his new fuel duty cut did not belong to the chancellor, it has emerged.

The photograph – posted on Sunak’s social media feed as he announced the 5p cut in Wednesday’s spring statement – sparked hilarity and outrage online.

Many were incredulous that the chancellor – a former banker whose wife is alleged to be wealthier than the Queen – drives a modest Kia Rio, a family hatchback which costs as little as £13,000.

“Sunak definitely pulled up in his Tesla and gave the person in the Kia Rio £500 so he could fill up their car for the photo op,” one tweeted.

The photograph was one of 34 photographs taken by a taxpayer-funded snapper and released on the Treasury’s Flickr feed to support this week’s mini-budget.

Four of those depicted the chancellor filling the red car at the forecourt of a Sainsbury’s in New Cross, south London – while others show him inside the store.

But it has emerged that the Kia car used for the photo op belonged to a Sainsbury’s employee – with Sunak borrowing it for his PR stunt. According to The Independent, he paid for the petrol himself.

Unsurprisingly, Twitter had some stern words for the chancellor following the revelations.

Starmer says Corbyn will not stand for Labour at next election