"Boris Johnson is not somebody that is immune to democracy." 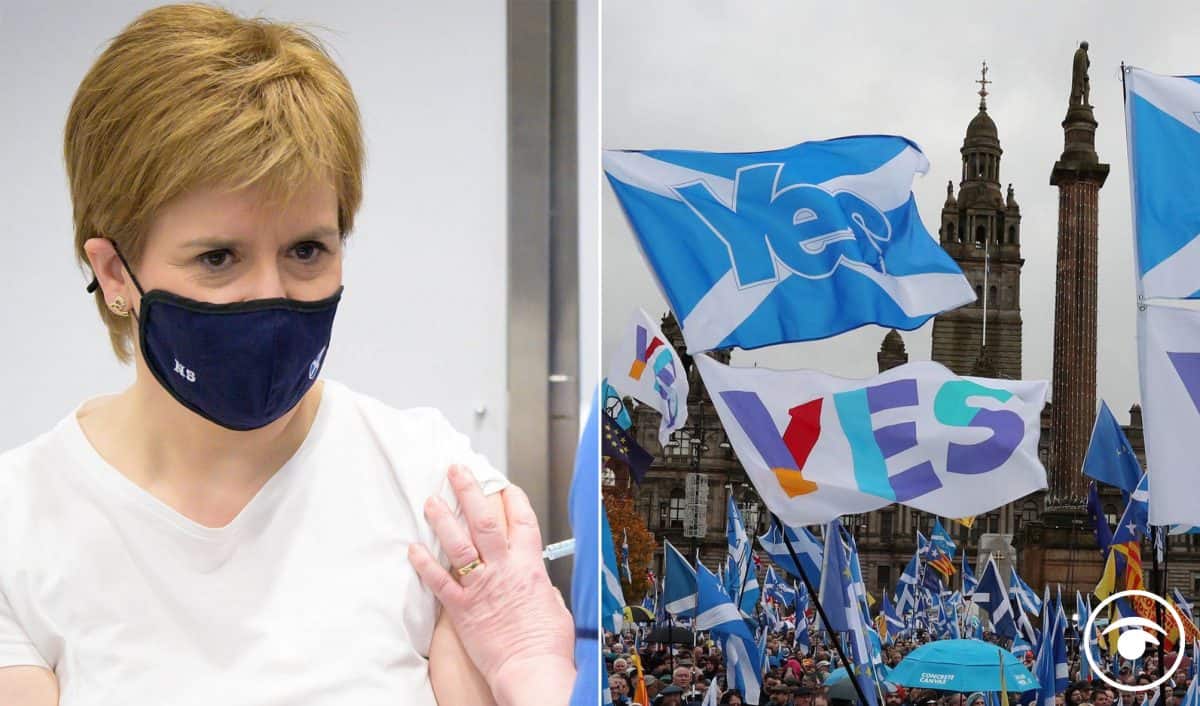 Nicola Sturgeon has laid down a marker to the PM over a second independence referendum, telling Sky News that if the UK government doesn’t challenge the Scottish government in court, then “by definition it would be a legal referendum”.

It comes as the suggestion an independent Scotland would have been unable to procure coronavirus vaccines is “nonsense”, she said.

Scotland’s First Minister said coronavirus vaccines are not a “gift” from the UK Government to Scotland and are procured on a joint four-nations basis with Westminster and the devolved nations.

Questioned on ITV’s Good Morning Britain programme: “If an independent Scotland was in Europe you wouldn’t have 2.8 million people vaccinated, would you?” the SNP leader replied: “I just think that is utterly nonsense.”

She added: “The UK was still within the transition period when it procured the vaccine and that didn’t prevent it procuring the vaccine on a four-nations basis with England, Wales, Northern Ireland and Scotland, the way we procure the flu vaccine every year. That was done, nothing would have prevented that happening had we still been in the European Union.

“And of course the delivery of the vaccination programme in Scotland is down to the sterling efforts and fantastic work of NHS Scotland vaccinators and teams across the country and they have my deep and everlasting appreciation for the fantastic work that they are doing.”

GMB presenter Sean Fletcher said the delivery of the vaccination in Scotland was also down to the “procurement of the UK Government getting those vaccines”.

Sturgeon will claim the right to hold a second independence referendum by the end of 2024 should the SNP win a majority in the Scottish elections this week, and said PM was “not entitled to stand in the way of the democratic choices of the people of Scotland” and would have to take the Scottish government to court to stop her second referendum.

“I’m saying if Boris Johnson wants to stop it, he would have to take legal action,” she said.

“If Boris Johnson didn’t do that [take legal action to dispute the legal basis of the referendum], by definition it would be a legal referendum. If he did do that, the courts would decide.

“But actually, we’re getting ahead of ourselves here because I believe that if the people of Scotland vote for this, if the support for independence continues, then it is not sustainable for any Westminster prime minister to stand in the way.”

A senior SNP figure told Sky News they believed the UK government would eventually agree to another referendum.

“I think in the end they will do it by agreement because there’s no clearer way to drive people away from the union than by forcing them to remain in it via the courts,” they said.

Sturgeon also told Sky News: “The UK government is already considering what they do in these circumstances because they can’t stand in the way of a clear democratic demand of the Scottish people.

“That’s why the UK government is talking about trying to rig the question and rig the franchise.”

“Boris Johnson is not somebody that is immune to democracy,” she added.