The self-styled 'Brexit hardman' said "this may be a decisive moment for our party.” 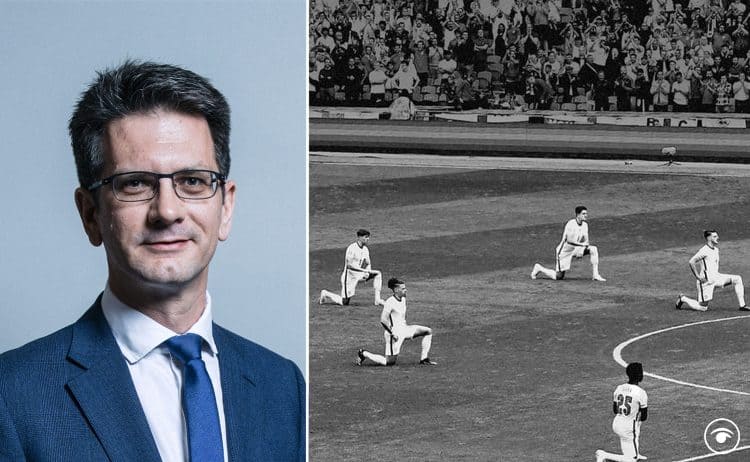 Steve Baker has called on the Conservatives to urgently change their attitudes towards people taking the knee.

The self-styled ‘Brexit hardman’ became the latest Tory to plead for his party to think again about dismissive attitudes towards the taking of the knee, calling for better understanding of the motives behind it.

Labour has been granted an urgent question in parliament on Wednesday on racism on social media after the abuse faced by players following the Euro 2020 final, and Baker said: “This may be a decisive moment for our party.”

“Much as we can’t be associated with calls to defund the police, we urgently need to challenge our own attitude to people taking a knee,” Baker wrote in a message to MPs on the Conservatives Against Racism, For Equality group. “I fear we are in danger of misrepresenting our own heart for those who suffer injustice.”

His intervention came after the England footballer Tyrone Mings accused the home secretary, Priti Patel, of “stoking the fire” at the beginning of the tournament when she described players taking the knee as “gesture politics” and refused to condemn booing by fans.

Johnny Mercer said the painful truth about Mings’ statement is that he is “completely right”, adding that he is “very uncomfortable with the position we Conservatives are “needlessly forcing ourselves into.”

The painful truth is that this guy is completely right.

Very uncomfortable with the position we Conservatives are needlessly forcing ourselves into. Do I fight it or stay silent? Modern Conservatism was always so much more to me. We must not lose our way. https://t.co/LXle3X0WFU

Baroness Warsi also called on her Conservative colleagues to consider their role in feeding racism in the UK, saying: