Theresa May also gave an impassioned speech announcing she will be voting against the cuts to the aid budget - the first time an ex-PM has voted against a Conservative three-line whip in 25 years. 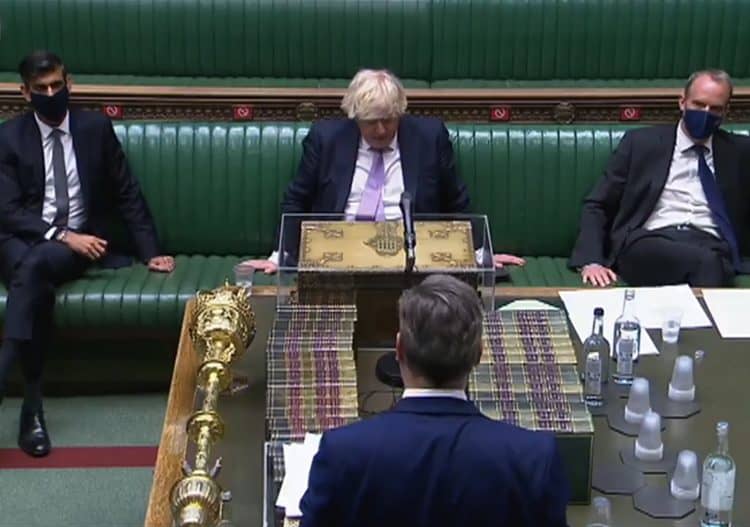 Keir Starmer has condemned the government’s “broad and typically slippery” plans to make temporary cuts to the foreign aid budget, warning it could lead to an indefinite retreat from the UK’s international obligations.

The proposed cut would see spending on international development slashed from 0.7 per cent of national income to 0.5 per cent.

Rishi Sunak first announced the slash to international development funding in March as part of the Budget – saying he would do “whatever it takes” to right the British economy.

The decision was described by the government as “tough but necessary” – saying we need to focus fiscal resources on resolving the domestic issues that have come as a consequence of the COVID-19 pandemic, before stretching out a financial hand to the rest of the world.

Despite Johnson insisting the cuts are purely provisional, the leader of the Opposition has announced that Labour will be voting against the plans amid fears the 0.7 per cent target will never be reinstated.

Labour leader Sir Keir Starmer says the chancellor is, in effect, "proposing a double-lock against reverting to 0.7%" of national incomehttps://t.co/whXcQjQKSw pic.twitter.com/LSng36MTje

“The whole point of the 0.7 per cent target is that it is relative to the UK’s economic success or challenges. It rises when we grow, it falls when we experience economic shock, like we have during the pandemic. Nobody in this house is arguing for overseas aid to be maintained at pre-pandemic levels,” he said.

“In effect the chancellor is today proposing a double-lock against reverting to 0.7 per cent.

“What the chancellor is setting out today isn’t a temporary cut in overseas aid, it’s an indefinite cut.”

'Every living Prime Minister thinks this is wrong, there is only one PM who is prepared to do this, and he's sitting there'

“This isn’t about palaces for dictators and vanity projects”

Theresa May also gave an impassioned speech announcing she will be voting against the cuts to the aid budget – the first time an ex-PM has voted against a Conservative three-line whip in 25 years.

“This isn’t about palaces for dictators and vanity projects. It’s about what cuts to funding mean,” she said.

“Fewer girls will be educated, more boys and girls will become slaves, more children will go hungry and more of poorest people in world will die.”

It’s a measure of just how callous and brutal this government is when even Theresa May thinks it’s gone too far. https://t.co/wZIjW5KZUU

Despite being listed as a government priority, one of the worst-hit sectors will be girls’ education, set to receive a 40 per cent blow to its funding if the proposals are passed.

Since he was made Foreign Secretary under the May administration in 2016, Boris Johnson’s supposed raison d’être has been to provide “every girl in the world” with access to education.

In an address to the 38th session of the Human Rights Council on 18 June 2018, the now-PM characterised universal education for women as the “single and most powerful spur to development and progress.”

He said: “We could solve the majority of the world’s most serious problems from infant mortality, to unemployment, to civil war, to unsustainable population growth and loss of habitat.”

“Indeed we could achieve virtually every sustainable development goal if only we could provide every girl in the world with at least 12 years of quality education.”

The cuts are set to deal a devastating blow to the humanitarian efforts made to level the educational playing field globally, with many girls educational programmes being either forced into stripping back on resources and workers or – in the most tragic of situations – into permanent termination.

According to figures published by Save the Children earlier this year, 700,000 fewer girls will receive an education as a direct result of the UK cuts.

However UK leadership is being undermined by huge aid budget cuts to girls' education@BorisJohnson reverse the cuts & ensure $5bn is raised for @GPforEducation this month https://t.co/MSIMiy8zhK