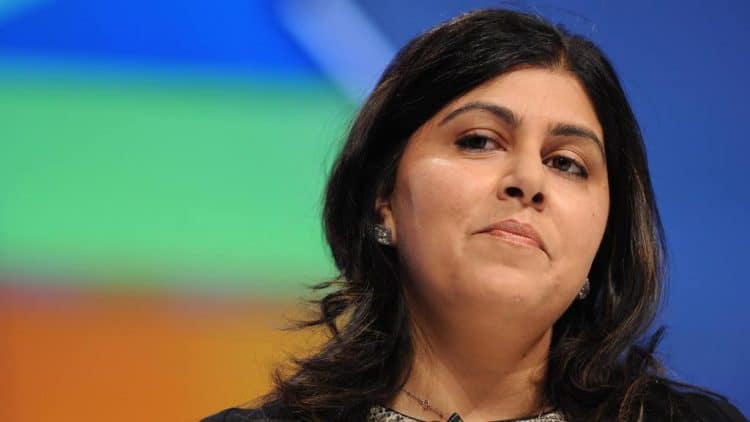 Baroness Warsi has called on her Conservative colleagues to consider their role in feeding racism in the UK.

The House of Lords peer called for a moment of reflection after England players were subjected to racist abuse after the Euro2020 final defeat.

Taking to Twitter, Warsi said it was “time to stop the culture wars that are feeding division” as she urged Ministers to consider their role in creating a culture where footballers are subjected to “vile” racist abuse.

Priti -we as govt, as @Conservatives need to think about our role in feeding this culture in our country
If we “whistle” & the”dog” reacts we cant be shocked if it barks &bites
It’s time to stop the culture wars that are feeding division
Dog whistles win votes but destroy nations https://t.co/wXwKKJH2eP

She tweeted in response to a message by home secretary Priti Patel who said she was “disgusted that England players who have given so much for our country this summer have been subject to vile racist abuse on social media”.

Last month Ms Patel chose not to condemn fans’ booing, saying it was a “choice for them”, as she criticised taking the knee as “gesture politics”.

Initially, the Prime Minister’s official spokesman declined to condemn individuals who booed England players, only going so far as urging them to be “respectful” in comments on June 7.

It was not until four days later that a No 10 spokesman toughened Downing Street’s response to say the Prime Minister wants fans to “cheer them on, not boo”.

Baroness Warsi wrote: “Priti, we as govt, as Conservatives, need to think about our role in feeding this culture in our country.

“If we “whistle” & the”dog” reacts we can’t be shocked if it barks &bites. It’s time to stop the culture wars that are feeding division. Dog whistles win votes but destroy nations.”

She later added: “As a proud centre right politician, as a proud part of a diverse vibrant nation that produced a football team that spoke to and represented England in all its modern diverse glory, it shames me that in 2021 some in politics are still playing fast & loose with issues of race.”

In politics, a dog whistle is the use of coded or suggestive language in political messaging to garner support from a particular group without provoking opposition. The concept is named for ultrasonic dog whistles used in shepherding.

Dog whistles use language that appears normal to the majority but communicate specific things to intended audiences.