Labour sources have been briefing that a number of Tory backbenchers could follow in the Bury South MP's footsteps. 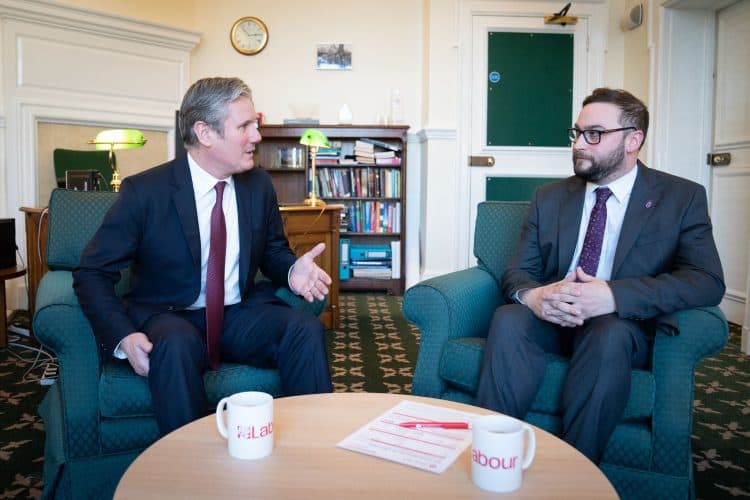 A number of Tory MPs are considering following in the footsteps of Bury South MP Christian Wakeford and defecting to Labour, reports suggest.

Labour is reportedly in discussion with “several others” from the Tory benches who could follow the ‘Red Wall’ MP across the floor.

According to sources in Sir Keir’s party, MPs are unhappy with the direction of the Conservative Party under Boris Johnson.

One shadow cabinet figure told the i newspaper: “We’re talking to people. There is a lot of unhappiness.”

‘The future is Labour’

Another Labour MP said they thought some Tories were waiting to see what would be detailed in the long-awaited Levelling Up White Paper, due to be published next month.

“I think there’s a lot hanging on the White Paper,” they said. “If it’s about ‘civic pride’ and what [think tank] Public First and [Public First partner] Rachel Wolf have been saying and there’s no new money, people will be fuming.”

Wakeford “obviously saw that the future is Labour,” another MP said. “And also he has seen first hand just how low they can go – there are limits.”

The Bury South MP said moving to Labour was “the most difficult decision I have ever had to make”.

He told broadcasters: “There’s been far too many issues where I’ve felt we’ve been on the wrong side. And compromise isn’t a dirty word, but it is possible to compromise too far.

“And when it’s getting to a point where it’s difficult to explain some of these issues then you know it’s wrong. At the moment we (have) a party trying to defend the indefensible and they are doing so gladly.”

Meanwhile Wakeford’s defection has reportedly “calmed nerves” among those calling for Johnson’s resignation, as Sajid Javid insisted the Prime Minister was safe in his job for now.

“I think people have recognised that actually this constant navel-gazing and internal debating is only to the advantage of our political opponents.

“The prime minister is probably thanking Christian for what he did because it’s made a lot of people think again, think twice.”

Johnson was under intense pressure over the Partygate saga, but battled on after senior Tory David Davis demanded “in the name of God, go”.

Javid said the PM is safe in his job for now. “It is damaging, of course it is,” he told Sky News.

And he told the Today programme the Partygate scandal had been damaging to democracy.

But asked on BBC Breakfast if the prime minister was “safe in his job”, Javid said: “Yes, I think he is.

“At the same time, people are right to be angered and pained about what they have seen and they have heard. I share that anger and pain.

“I think it is right that there is a proper investigation going on that will establish the facts and that the prime minister will come back to parliament and properly respond.”