A new poll puts support for remaining in the UK marginally ahead of independence. 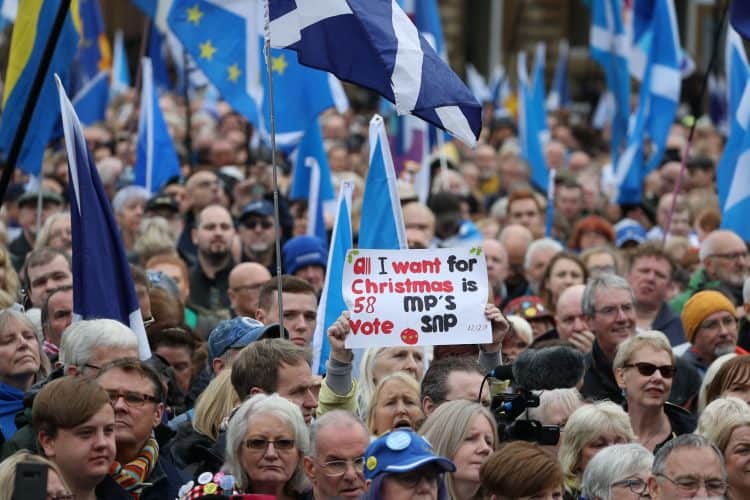 Most Scots still support staying in the Union, a new opinion poll has revealed.

When the undecided respondents are excluded, those against leaving the UK are at 52 per cent – compared with 48 per cent in favour of remaining.

Pamela Nash, chief executive of Scotland in Union, the campaign group, told The Times: “This is yet another poll showing that a majority of people want to remain part of the UK.

“The SNP should drop its obsession with trying to divide us and focus on what really matters to communities. Rather than building a border with England, as part of the UK we can spend more on our schools and hospitals, protect jobs and livelihoods.”

Corbyn, who stood down as leader in 2019 and has since had the whip removed by the party because of his response to a report on antisemitism within Labour, struggled during his time in charge to settle on a position on the constitutional question in Scotland.

But on Thursday, he told BBC Radio Scotland’s Drivetime programme he feels a referendum is imminent, adding that he does not “believe it’s a good idea to prevent people expressing a point of view”.

“I’m strongly in support of people having their voice, therefore an independence referendum is something that I believe will happen probably within a few years,” he said.

Meanwhile Nicola Sturgeon has said the success of the Cop26 summit in limiting the rise in global temperatures cannot be taken for granted.

The First Minister acknowledged there is still a “significant gap” between ambitions to keep the rise in global temperatures below 1.5 degrees and the current commitments from world leaders.

Delegates from around the world are beginning to gather in Glasgow ahead of the summit opening this weekend.

During a media briefing on Friday, Sturgeon was asked if Cop26 could become shorthand for failing to tackle climate change.

She said: “I don’t think success at this summit can be taken for granted at all. And that’s probably an understatement.

“World leaders will gather here Sunday into Monday. “And the position at the opening of the conference is one that sees a significant gap between where we need to get to to keep 1.5 degrees alive as the limit of global warming.”

Current commitments were not sufficient to keep global warming below two degrees, she said.

The First Minister continued: “If that gap can’t all be closed in Glasgow, then at the very least we need to come out of Glasgow with a clear process and timescale around the way in which it will be closed.

The First Minister also said she wanted the UK’s presidency of the climate change summit to be a “roaring success”.

She urged those visiting Glasgow for the conference, including delegates and activists, to follow measures in place to prevent the spread of the virus.

Efforts have been made to ensure delegates are fully vaccinated, she said, while those entering the blue zone will need to take daily lateral flow tests.