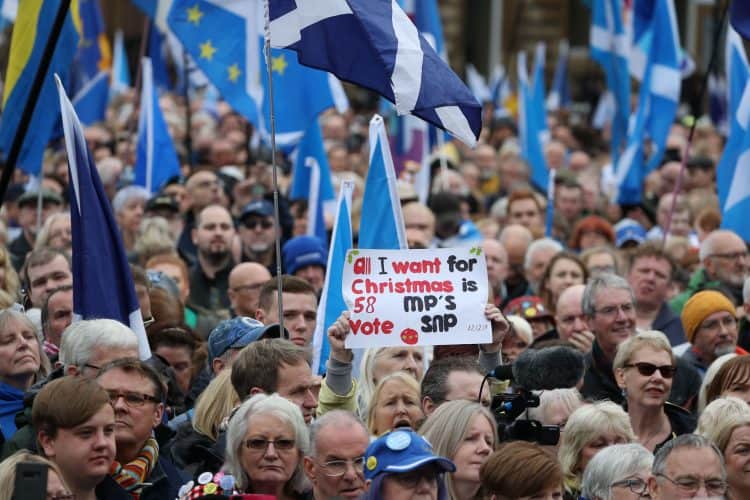 Scots could be granted a second independence referendum if polling consistently shows 60 per cent of the population want a fresh vote, a senior Cabinet minister has said.

The Scottish National Party, led by Nicola Sturgeon, have pushed harder for a second vote since pro-independence parties won a majority of seats in Scottish parliamentary elections earlier this year.

Boris Johnson has consistently dismissed calls for a new referendum – despite Holyrood indicating it will press on with a referendum bill regardless.

Following the 2014 vote, which the SNP lost, former Prime Minister David Cameron said the issue had been “settled for a generation”, while Theresa May repeatedly said “now is not the time” to rerun the ballot.

But, speaking to POLITICO, Scotland Secretary Alister Jack suggested that there were terms on which Westminster would grant a second referendum.

Michael Gove, who is in charge of Union policy, said earlier this month “if it is the case that there is clearly a settled will in favor of a referendum, then one will occur.”

Asked to clarify what “settled will” might look like, Jack suggested a figure of “60 per cent” of Scots.

“But that’s not where we are and it’s not how I perceive things to be,” he added. “I think I’m broadly where the public are, which is that now is not the time to be having a referendum. We’ve had one, we’ve made our decision, let’s get on and rebuild the economy and rebuild people’s lives.”

Between summer 2020 and spring 2021, 20 consecutive opinion polls indicated a lead for the “Yes” side – but more recent polls have shown a small lead in favour of Scotland remaining in the UK.

The most recent poll revealed Scots were split on the issue, with 42 per cent in favour of holding a referendum in the next five years.

Another vote on independence could happen before the end of 2024, the new power-sharing deal between the SNP and Scottish Greens says.

The agreement, negotiated since May between senior members of each party, will put two Green MSPs into Government and formalise the pro-independence majority in Holyrood.

In a 51-page document detailing the deal between the two sides, they pledge to “secure a referendum on Scottish independence after the Covid crisis”.

It adds: “This would be within the current parliamentary session on a specific date to be determined by the Scottish Parliament.

“If the Covid crisis has passed, our intention is for the referendum to be within the first half of the five-year parliamentary session.”

Related: Tom Tugendhat: Kabul blasts are ‘what defeat looks like’